To start things off today a fun Sesame Street clip, “No Cookies in the Library” (via the new WorldCat Blog):

And now a couple of links about reading and writing:

I’d not intended to visit Oxford at all, but couldn’t turn down the free lodging, so I used it as my base to visit Bath and environs. That was the plan anyhow and on 19 February 1998 I took the train to Bath. Despite a late start, I had plenty of time to take in the sites. The city was a site in of itself with its stone Neoclassical architecture. I found myself slowing down just to take it all in.

I first visited the Roman Baths Museum, a place I wanted to visit ever since I read about it in my grandfather’s Reader’s Digest guide when I was a kid. The baths fulfilled my expectations and then some with it’s great archaeological and architectural wonders. Upstairs in the Victorian splendor of the Pump House I drank a glass of the Bath Spa water. It actually tasted pretty good, basically warm water with a strong mineral flavor. I actually felt quite peppy after imbibing it and headed out to tour the city of Bath.

I visited Bath Abbey with it’s West Front covered with carvings of angels ascending and descending ladders, one angel in a full nose dive. Then I walked by the Georgian architectural marvels of the Circus and the Royal Crescent. At the Bath Museum of Costume I enjoy an exhibit of waistcoats throughout the ages and see some I’d look good in (remember I was working at Colonial Williamsburg at the time), but 99.8% of the clothing on display were women’s garments, so there wasn’t much for me. In the adjacent Assembly Rooms I saw the familiar Allen Ramsay portraits of George III and Charlotte. The most beautiful sight of all in Bath is the Pulteney Bridge which doesn’t seem like a bridge at all when crossing it because it’s lined with shop fronts, but from the river one could see its graceful arches with water pouring through it into cascades.

Returning to Billy’s dorm room, I found a note from him telling me how awful my stuff smells. It was true that I had not had the opportunity to visit a laundromat for some time. Still I felt embarrassed and insulted. In retrospect, I overreacted and packed up all my stinky belongings and checked into Oxford Backpackers Hostel for the night. It was a bum ending to a good stay in Oxford.

Newport the Otter prepares for a soak at the Roman Baths. 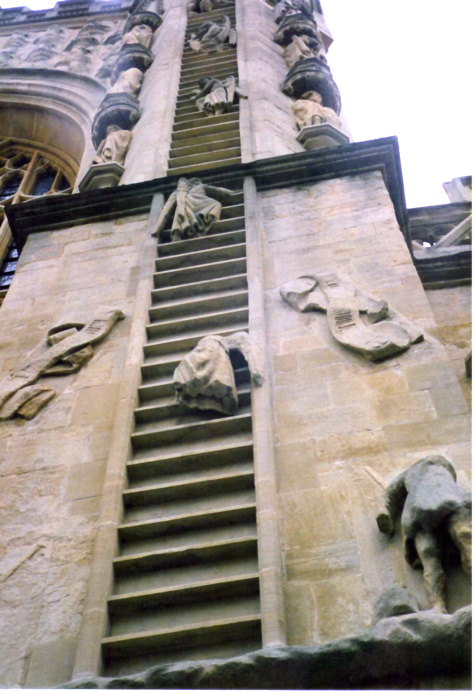 Angels go up and down on the West Front of Bath Abbey.