I crossed under the Channel again on 26 February 1998, arriving in London for the final leg of my journey. I checked into O’Callaghan’s Hostel in Earls Court, which was a dump, but a dump conveniently located near a tube stop and charging only £10 per night.

I indulged myself in hokum by paying a visit to the Sherlock Holmes Museum. It was fun to play make believe at 221B Baker Street and read letters that real live people have written to Sherlock Holmes. On the other hand, like the Dublin Writer’s Museum, there’s just something about books that you can’t really get into in a museum. The real fun is in reading.

I passed by Madame Tussaud’s, and while I’d not planned to visit, I figured as long as I was there and there was no wait to get in, I may as well find out what all the fuss is about. I was pleasantly surprised that I enjoyed the alarmingly life-like waxworks and their clever arrangement in various galleries. I found it interesting to learn the history of Madame Tussaud during the French Revolution and the “how a wax dummy is made” exhibit. Unfortunately, after all the exhibits I ended up on The Spirit of London, a psychedelic carnival ride in a “black cab” through London history with animatronics, anachronisms, and alarming chronological jumps from the Great Fire to Carnaby Street in the 1960’s. It was so disturbingly hokey it soured the entire Madame Tussaud’s experience for me.

That evening I engaged in a much more historic tradition, The Ceremony of the Keys at the Tower of London. A small group of tourists are allowed to witness this simple and rather quiet performance each night. I liked how the Yeoman Warder described the 700-year old ceremony as the “longest-running show in London.” He also pointed out that it happened every night, even with Jack the Ripper prowling around nearby and during the Blitz. Photography is prohibited, but I found this website that has pictures and videos of the Ceremony of the Keys if you’d like to see what it’s like.

I finished off the evening with some food and people watching in the “centre city.” 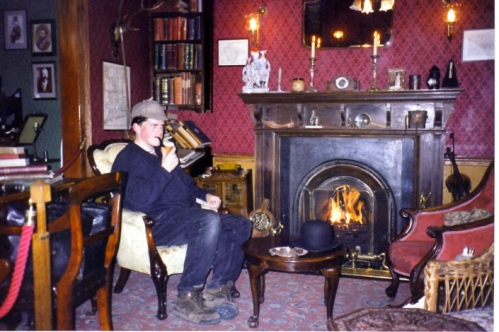 How many lips have touched that pipe before I put it to my mouth?

Me and the Dalai Lama are real close. We go back 3 or 4 reincarnations.

Evening glow.
Let the spooky season begin with some mysterious potions!
Heard a noise on the back porch and found a squirrel. This strikes me as unusual squirrel behavior.
Earliest autumn.
Howdy.
Patch of sky.