On the first of March 1998, I made a rail journey across London to the borough of Greenwich. I had one day left on my Britrail pass so I figured I may as well use it. Part of the adventure was a transfer at Clapham Junction which claims to be the busiest station in Britain and seems to have a gazillion tracks so I’ll believe that claim.

In Greenwich, I straddled the Prime Meridian at the Royal Observatory. I strolled through the timely exhibits but the coolest thing I saw there was a camera obscura which projected an image of Greenwich onto a white table. I thought it was a photograph at first until I saw the cars and boats moving. I also visited the National Maritime Museum where I learned an awful lot about Admiral Lord Nelson. I also admired, but did not board the Cutty Sark clipper (which I wrote about previously), which is in dry dock in Greenwich.

I’d not enjoyed any nightlife since Liverpool, and it would not happen in London either. I passed by many intriguing pubs but was turned off by the crowds of suit & tie wearing patrons who looked like they were discussing stock prices. Really, the Big City was intimidating me. On Saturday night I attempted to go to a night club but when I saw all the hip, attractive young people in the queue I turned around and went home.

For my last night abroad, I wanted to do something and selected from the Time Out listings a early Sunday, relaxed chill-out club night in Brixton. I took the Tube to Brixton with Eddy Grant’s “Electric Avenue” and The Clash’s “Guns of Brixton” in my head. But I couldn’t find the club. I mean, I found the street, but the street number of the club just plain didn’t exist! So I ended up wandering aimlessly again, taking the tube to Piccadilly Circus where I gazed at neon and played a couple of games in a big arcade. Kind of a bum last night. 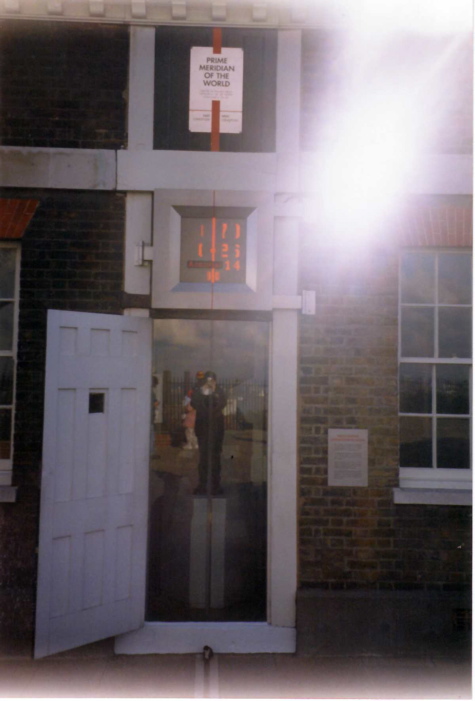 The Otter and I at Greenwich Mean Time.

Error: Twitter did not respond. Please wait a few minutes and refresh this page.