The Visited States Maps Generator at the Defocus Blog allows you to create a map of US states (and Canadian provinces if you chose) that you’ve visited, color-coded by the amount of time and commitment you’ve given to each place.

Amber means I’ve at least slept there and seen a few things. I have a first-hand idea of what the state is like.

Blue means I’ve spent a good amount of time in that state.

Green means I’ve spent a lot of time in that state, weeks at a time on multiple visits – or lived there. 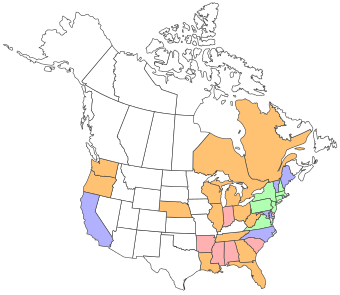 I made the decision not to include states where I only changed planes at the airport (for me that would be Minnesota and Texas).  I also think that there should be a distinctive color for  states one has lived in compared to states that one has just visited a lot.  The states I’ve resided in are New Jersey, Connecticut, Virginia, and Massachusetts.  I’ve also included New York, Pennsylvania, and New Hampshire in the green category because I’ve traveled to those states frequently (the first two primarily due to family living there).

What does your map look like?  Go to http://www.defocus.net/visitedstates/ and find out.

Cool kids on the train.
Duke Ellington Memorial by Robert Graham
Three Dancing Maidens by Walter Schott
Where the lines split.
Too much art.
American sculpture.