I started a tradition back in 1996 of making a list of the most memorable events of the year.  My definition of memorable can include both the positive and the negative, but generally it’s the good things that make the list.  That first list in 1996 had exactly twenty items, so I’ve made the list a top twenty every year since.  I usually try to post this list close to December 31st, but late is better than never.

My 2014 list is a typical hodge-podge of activity.  Some of the events have links to when I wrote about them at the time.  Others I wrote a little bit more about in this post.

January – Furnace – Our furnace overheated and died during our holiday travels last year, and so we had a cold New Years at home, even with new space heaters bought for the occasion.  We got a new furnace installed, and it cost lots and lots and lots of money, but it works very well.  Definitely not a good thing, but certainly memorable, and it all worked out in the end.

January – Ice Skating – Peter took an ice skating class and I went ice skating for the first time in years.  My skates don’t fit anymore – ouch.  But we had fun.  Here’s my first ever animated GIF of Peter skating:

Through the year – Education activism – This year I learned a lot about the crises affecting public education, and joined other parents, students, and teachers to advocate for positive change.  There’s a lot more I could do and should do, but I educated myself on the issues, wrote some blog posts, attended a school committee meeting, and a rally on the steps of the State House.  And there were some positive results, including the defeat of a charter school expansion bill in the Massachusetts’ Senate.

February 1st – Wayne Potash concert – As aging folkies, it was a pleasure to take the kids to our old haunt of Club Passim for this special concert.

March 22nd-24th – New England Archivists Spring Meeting – My only business trip of the year took me to the lovely town of Portsmouth, NH.  Highlights of the conference include a keynote speech by punk rocker Ian MacKaye about his Fugazi Live Series archives and participating in a NEA Jeopardy! tournament (my team won!).

April 21st – Patriots Day – We took back the finish line on a beautiful spring day, with my whole family cheering on the runners in the Boston Marathon. 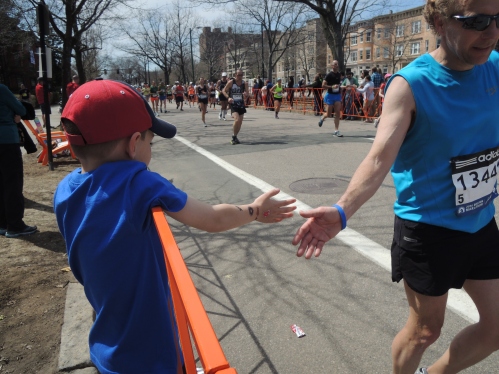 April to September – Red Sox season – The 2014 season was not as good as the 2013 season for the Red Sox, but we had fun attending several games, including a few with tickets given by friends who have much better seats than we usually get.  Since Peter is a member of Kid Nation, we can enter the ballpark early to watch batting practice from the Green Monster, and at one game Yankees pitcher Shane Green threw a ball to Peter. We saw rookies Alex Hassan and Garin Cecchini get their first major league hits.  And we sat behind home plate at McCoy Stadium and watching future Red Sox clobber their opponents.  We rode our bikes to Fenway and used the new bike parking.  But probably the coolest thing is when Susan and Peter got to help with the banner for the 2004 World Series Champions reunion in May.  You can see them below the 4 in the photo below. 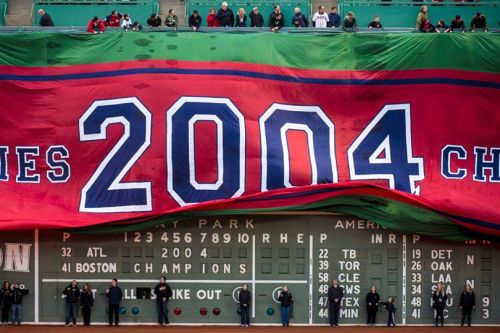 April 22nd-25th – Spring Break in Virginia – Peter & I visited my mother in Virginia and spent time exploring Colonial Williamsburg and playing at Go Karts Plus.

June 15 – Father’s Day – Tradition dictates that Father’s Day is celebrated with brunch and a nature walk.  This year we dined at Nancy’s Airfield Cafe in Stow and then explored the swamps and caves at Rocky Hill Wildlife Sanctuary.

June 12th – July 13 – World Cup – I loved getting sucked into the quadrennial event, and following the ups and downs of the US Men’s National Team.  Particularly fun was attending public viewing parties in Watertown (see the celebration of Clint Dempsey’s goal against Portugal below) and at Boston City Hall.  Then I spent the entire final making bad puns on Facebook.

June 21st – BTU School Summer Blastoff – Ostensibly a fundraiser for our son’s school, but moreso this was an opportunity to get out of the house and dance the night away with Susan.

July 20th & 27th – Cambridge Common walking tour – For the third time, I had the privilege of researching, writing, and leading a walking tour for Boston By Foot.  This time we explored the endlessly fascinating history of Cambridge Common and it’s environs.  The official tour had a good turnout despite a downpour.  If you missed it, we’ll be running it again on Sunday, September 27, 2015 at 2 pm.

August 17 – Crane Beach – All summer long my daughter Kay asked to go to the beach.  Finally, as summer was drawing to a close we made a day-long outing to Crane Beach in Ipswich.  It may have been the best day in Kay’s young life.  We’ll have to return to her happy place more often next summer.

August 30 – September 2 – Great Wolf Lodge – We met up with Susan’s parents at Great Wolf Lodge in the Poconos Mountains of Pennsylvania for four days of swimming, sliding, playing, and eating.  It was cheezy fun. 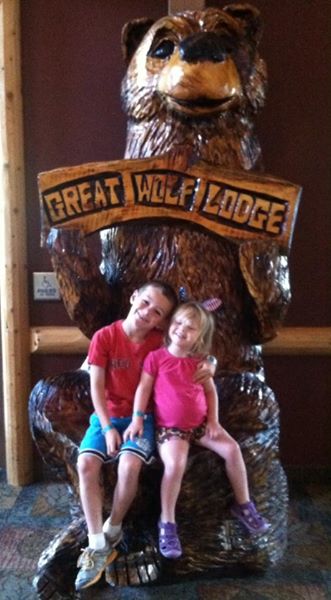 September 20th – Baseball Clinic – My son loves baseball and so there was no doubt that he would enjoy a free baseball clinic for children  hosted by the Major League Baseball Players Alumni Jim Rice Field in Roxbury.  Former major league ballplayers instructed the children. They practiced throwing with Rich Rodriguez and Joe Johnson, outfield drills with Billy Sample, baserunning with Al Severinsen, and infield drills with John Tudor (seen handing a ball to my son below).

September 27th – Rockin’ With Raptors – The annual festival at the Boston Nature Center, the Mass Audubon nature center closest to our house, was a blast. There was barbecue and cake, birdhouse building, face painting, music, live animal demonstrations and many other activities.  And of course, the stars of the show were the birds of prey.  Peter was particularly devoted to asking the volunteer lots of questions about the raptors.

October 11th to 13th – Cooperstown – We went away for Columbus Day Weekend to Cooperstown, NY, staying at the lovely Lake House Hotel and visiting the Farmers Museum during the annual Tractor Fest, the Cullen Pumpkin Farm, and National Baseball Hall of Fame.

October 20th to 27th – Jury duty – I served on a challenging criminal trial with contentious deliberations.  And I was appointed foreperson.  It was a stressful week, but hopefully we made the right decision.
November 23rd – Kay leads church in dancing – One day at the beginning of church service at Hope Central in JP, my daughter went up in front and started dancing in circles.  Then the pastor joined in.  Then several people throughout the congregation started dancing in circles as well.  It was a special moment.

November and December – Nana’s visits – My mother came to visit twice late in the year spending lots of quality time with the grandchildren.  Nana and Peter played chess, we visited the zoo, we saw “Peter & the Wolf” at Symphony Hall in November, and celebrated Christmas together in December. 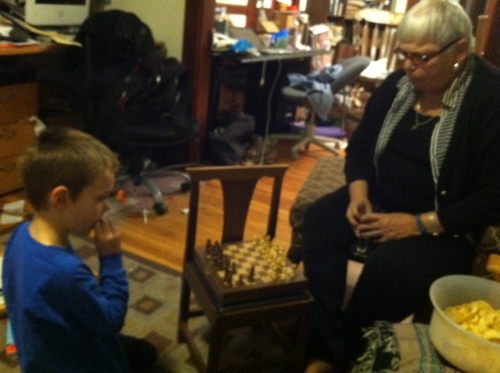 November 29th – New England Revolution Eastern Conference Championship – Peter and I jumped on the bandwagon as the New England Revolution made their way through the MLS postseason.  We joined 10s of thousands of fans in Foxboro as the team won the Eastern Conference against the New York Red Bulls.  The next week we saw the sad MLS Cup Final loss against the LA Galaxy on tv.