The Freedom Trail may be the most hackneyed of  Boston tourist destinations, but it’s still worth it for a resident to take a walk on it every so often.  And taking my children on the walk for the first time, I got to see it through their eyes.  Plus, there are always some surprises, like a pop-up concert by the Handel and Haydn Society at King’s Chapel (which entranced my daughter). 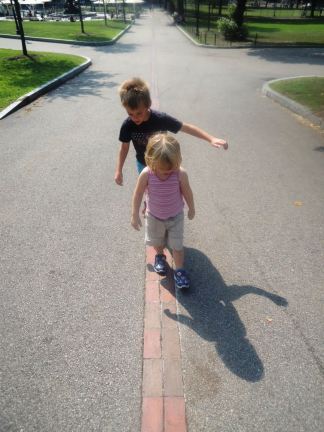 Listening to the Handel and Haydn Society vocalists.

Traffic cones need to pray too.

“Statue of Benjamin Franklin, do you have a reservation?”

An obstacle to Freedom 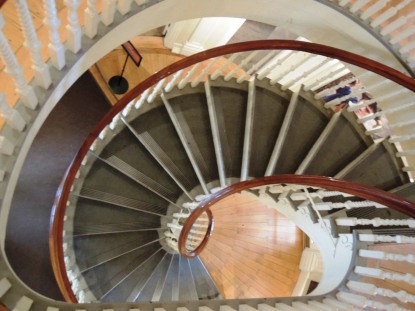 The circular staircase of the Old State House dates to 1830 when it was renovated to be Boston City Hall.

The view from the Old State House balcony. 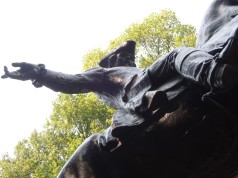 After completing this novel, I saw it described as a picaresque which is “a genre of prose fiction which depicts the adventures of a roguish hero of low social class who lives by his wits in a corrupt society.” The genre also has no plot.  I wish I knew these things going into the book because it would’ve made more sense (especially the plotlessness).  Assault on Paradise is the tale of Pedro Albaran who arrives in colonial Central America escaping the Inquisition.  First he works as a book-keeper for a monastery.  On a journey to another settlement he and some companions are separated and live on their own in the jungle.  Pedro falls in love with and has children with an indigenous woman known only as “The Mute” and their whole relationship is totally creepy.  After her death, Pedro returns to society just as the indigenous population launches and uprising.  The book details the sordid underside of colonialism – the conquistadors and the church – and all its levels of corruption.  It was a difficult read but that may be more of reader error than the book itself.