Once again, Massachusetts public schools are ranked the the best in the nation. This may be surprising to many based on the constant political rhetoric that public schools in Massachusetts are a “disaster.”  One of the major issues is the great gap in achievement between low-income students and their more affluent peers.  For me and many others, the obvious solution to this problem is to look at what is making schools succeed in more prosperous communities and apply the same type of resources, facilities, and teacher support to schools in impoverished communities.  By working to make education equitable across class and racial lines and through other programs to address poverty, we believe these gaps can be narrowed significantly.  Unfortunately, this goal is undermined by the efforts of our governor, mayor, corporate philanthropic organizations and those who support them to take drastic measures to “fix” public schools and  perhaps replace them outright. Worse, the proponents of this type of corporate education reform often seem to have ulterior motives at odds with the goals of creating equitable schools or alleviating poverty.

Some of the challenges to creating equitable public education in Boston and Massachusetts include:

Thursday night the Boston Education Justice Alliance is hosting a Town Hall for parents, teaches, students and concerned citizens to discuss these issues and how we can create just and equitable public education in the city.  I encourage you to attend.  Here is a flyer and I’ve included links to the websites of the organizations involved: 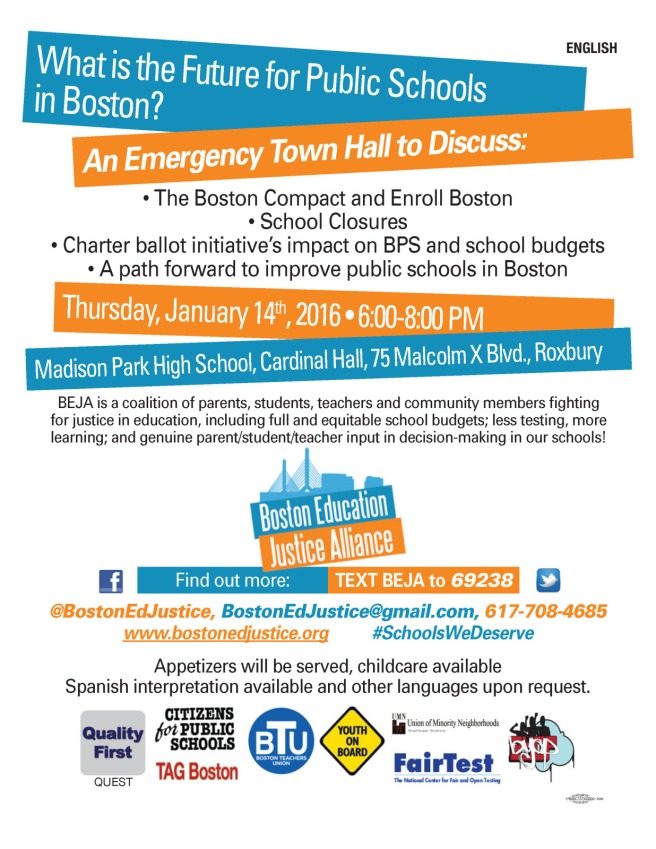 I don’t get to write on education issues as often as I’d like to as by the time I get my thoughts together it’s usually no longer topical, but if you want to keep up with the issues I encourage you to follow the websites, blogs, and Twitter accounts of the many people and organizations below.  There is an incredible amount of passion, knowledge, and creativity behind this campaign.