H is for Haffenreffer

On a prominent smokestack near Bismark and Germania Streets read the words “FENREFFER BREWERY.”  The smokestack is a bit shorter than it was home to Rudolph Haffenreffer’s brewery, one of 35 breweries the dotted the Stony Brook valley in Jamaica Plain and Roxbury in the 19th and early 20th centuries.  Haffenreffer was one of 6 local breweries to survive Prohibition, but it succumbed to competition from large commercial breweries in 1964.

In the 1980s, The Jamaica Plain Neighborhood Development Corporation adapted The Brewery Complex into the home of 50 local businesses.  There’s Ula Cafe and the Bella Luna restaurant, bar, and night club.  There are children’s music classes and dance studios.  There’s a gym and Bikes Not Bombs.  There are offices for community activists and capitalists alike.

And beer-making continues at Boston Beer Company’s Samuel Adams Brewery.  While most Samuel Adams beer is contract brewed elsewhere, all new test batches are brewed here, and some local watering holes get fresh Jamaica Plain brews, including nearby Doyle’s Cafe.  Thousands of people take the tour each year making it the clear frontrunner in Jamaica Plain tourist destinations. 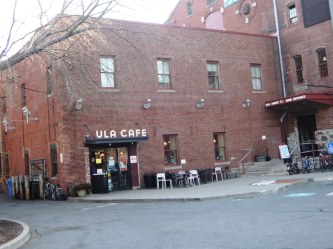 Post for “H” in the Blogging from A to Z Challenge.