A companion piece to Star Wars: The Force Awakens, this book contains three short stories about the protagonists of that film immediately before the events of the film.  Finn, then known as FN-2187, goes through rigorous training as a stormtrooper showing great skill and leadership, but the First Order are concerned that he has one flaw: empathy.  Rey discovers an entire ship among the wreckage she’s scavenging and works to get it into flying shape.  Poe, unlike the other who are orphans, remembers the stories of his mother the pilot and his father the foot soldier in the Rebellion, as he is recruited to join the Resistance.  They’re good, concise stories with a lot of insight into the characters.  This is a good book for a Star Wars fan or anyone who enjoyed The Force Awakens.
Rating: ***

Previously Read by the Same Author:  Team of Rivals and Wait Till Next Year: A Memoir
Summary/Review:

This book is a dual biography of Theodore Roosevelt and William Howard Taft.  The two men are opposites in many ways.  Roosevelt was sickly as a child but grew up to be a muscular outdoorsman, while Taft a talented young athlete as a young man grew sedentary with age leading to his notorious girth.  Roosevelt had a lot of charisma but his arrogance could get the best of him, while Taft was genuinely kind almost to a fault.  The two grew to be political allies and friends.  Despite both being born into wealthy and powerful families, and adherents of the pro-business ideology of the Republican party, they both became leading Progressives chipping away at the power of big business and the wealthy class.  Things seem to go well until Roosevelt retires and Taft becomes his successor as President.  Taft has to work to make an impression in his predecessor’s shadow, not at all helped when Roosevelt turns against Taft for not being Progressive enough.  The election of 1912 turns out to be an ugly one as Roosevelt runs against Taft for the Republican nomination – one of the earliest campaigns with statewide primaries and candidates campaigning on their own behalf – and leading to a raucous convention.  Taft wins the nomination, Roosevelt splits off to run on his own “Bull Moose” Progressive ticket, but the damage is done for both men.

This book also focuses on the muckraking journalists of the Progressive Era such as Ida Tarbell, Lincoln Steffens, and S.S. McClure who both inspired and prodded Roosevelt and Taft.  This part of the book is both very interesting, but also feels both like a long tangent from the Roosevelt/Taft biography and short shrift for the muckrakers who deserve a book of their own.

O is for Orange Line

Each of the MBTA’s lines has its own personality.  I don’t ride the Blue Line much so I can’t speak to that.  But the Green Line tends to be dominated by college students and young adults.  By day it’s like a study hall, by night it’s like a cocktail party.  The Red Line is more for professionals, people in suits going to the Financial District or medical professionals in scrubs going to a hospital.  And the Orange Line?  To paraphrase James Joyce “Here comes everybody!”  Passengers are diverse in ethnic and social backgrounds, and it seems the line where I most often see children commuting with their parents.  In fact, for several years I took my son to childcare on the T and I was always impressed by how Orange Line riders would help out – offering a seat, clearing a space, helping carry the stroller, and entertaining a cranky toddler.  That’s why I contend that the Orange Line in its own quiet way is the friendliest line of the MBTA system. 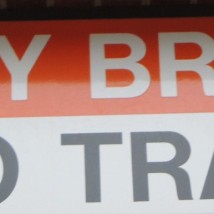 I always love that the word is GREEN while the color is ORANGE.

The end of the line at Forest Hills.

Post for “O” in the Blogging from A to Z Challenge.