In honor of Jane Jacobs’ 100th birthday yesterday, I took a tour of the North End lead by Max Grinnell, the Urbanologist, an urban studies expert who divides his time between Boston and Chicago.  While I’ve been leading tours in the North End for more than 15 years, I learned some new things and visited places I’d not been before.  We talked about what Jacobs found successful in the North End in 1960 and what has changed in the intervening years as the neighborhood has gone remarkably upscale.  The highlight of the tour was a stop at Polcari’s Coffee where the shop owner gave a personal history of the business and the neighborhood.

If only the weather had been better, but it was worth getting soaked to the bone to celebrate Jane Jacobs and urbanism. 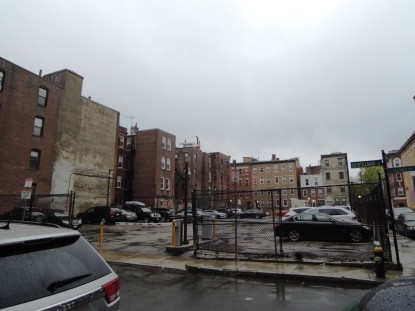 In the 1960s, Jane Jacobs noted that North End residents could live without cars, but today parking lots are squeezed in. Is car dependency sustainable in the North End? 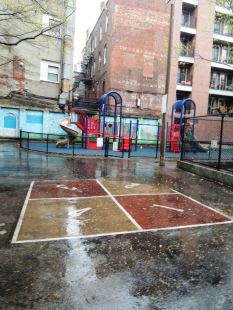 A small playground built in the 1960s to give more play space to North End children, at a time when many more children lived there.

A bit of placemaking, a signal box painted to resemble an apartment building.

The North End library branch is the mid century modern interpretation of a Roman villa.

Nazzaro Community Center is one of the many community gathering spots. 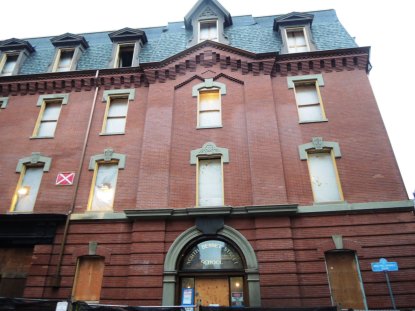 Paul Revere Mall or prado on an unusually empty day. It was built during the Depression to give North End residents some breathing room.

A DIY religious site adds local color to the neighborhood. 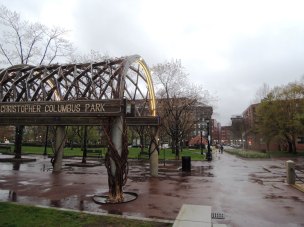 Built in 1976, Christopher Columbus Park created a reflective space between the North End and the waterfront. 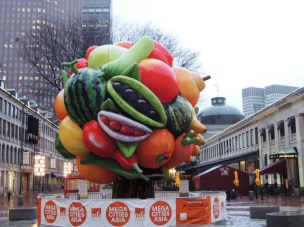 While not on the tour, I enjoyed the whimsy of the giant, inflatable fruit tree at Faneuil Hall Marketplace