Following on the Hurricane Katrina book, my son and I read this history of the World Trade Center in New York City.  The book is a full history of the Twin Towers dating back to its conception by David Rockefeller in the 1960s and deals with controversies such as the removal of Radio Row by eminent domain.  There’s a lot of detail about the design and construction of the buildings, and fun stories such as Philipe Petit’s walk on the wire.  The book also dedicates a chapter to the first bombing of the World Trade Center in 1993.  The September 11 attacks are of course a major subject of the book, and again done in a clear manner appropriate to the age of the reader.  There is also a chapter on the memorial, museum, and new One World Trade Center building.  On the 15th anniversary of the September 11th attacks, this was a good way to remember the events of that day with someone to young to remember it himself.
Rating: ***1/2

I find it easier to work through difficult issues through books so I was impressed when my son picked out out this history of Hurricane Katrina written for children.  The book does a good job of setting up the history of New Orleans’ location and the necessity of levees as well as a primer on hurricanes and other storms.  The details about the storm and the flooding are clear and not sugar-coated (without being overly graphic) and it does not shy away from the poor decisions of political leaders.  There is also a chapter on the role that climate change played in the disaster.  All in all it’s a good introduction for children to one of the great tragedies of recent years, but something that may seem a long time ago to them.

This novel is rooted  in the fact that John Lennon bought an island off the coast of Ireland and is premised on the idea that he went to visit the island in 1978 for primal scream therapy.  Getting to the island is most of the trip as hordes of media and the weather put up roadblocks.  It’s really more of a story about a character named “John Lennon” who happens to be a celebrity put into rural Ireland and Barry’s philosophical musings put into the dialogue.  It kind of has aspirations of being a Joyce or Becket work without the same skill.  Frankly it’s kind of boring.  My favorite part was the non-fiction chapter which is a travelogue of Barry’s research trip to the locales in the novel.

This is a book that I thought was a response to the widespread idea in the contemporary United States that taxation is a bad thing that restricts liberty.  While it is in some ways that book, it comes at from a different angle presenting the legal and philosophical case that rights actually have a fiscal cost, and therefore taxes are necessary to protect them.  The book is a bit challenging as it has some legalese, but overall the authors do a good job of defining the issues and presenting their case for taxation.
Favorite Passages:

“American liberalism, like its counterparts elsewhere in the world is based on the reasonable premise that public investment is richly repaid, not least of all because reliably enforced property rights help increase social wealth and therefore, among other benefits, swell the tax base upon which government can draw to protect other kinds of rights.  But the strategic wisdom of an initial investment does not undo the fact that it is an investment.”

“Many political conservatives, but not they alone, urge government to ‘get out of the marketplace.’ For their part, some liberals counter that government quite legitimately interferes, or ‘steps into,’ the market wherever disadvantaged Americans are at risk.  But this familiar debate is built on sand.  No sharp line can be drawn between markets and government: the two entities have no existence detached from one another.  Markets do no create prosperity beyond the ‘protective perimeter’ of the law, they function well only with reliable legislative and judicial assistance.”

“Individual freedom, however defined, cannot mean freedom from all forms of dependency.  No human actor can single-handedly create all the preconditions for his own action.  A free citizen is especially dependent… Liberty, rightly conceived, does not require a lack of dependence on government; on the contrary, affirmative government provides the preconditions for liberty.  The Bill of Rights is a do-it-yourself kit that citizens can obtain only at tax-payer-funded outlets.”

“The most common and persuasive criticism of the regulatory-welfare state concerns incentives to antisocial behavior and other undesirable side effects. But ‘dependency’ in and of itself should not be considered one of them.  There are different kinds of dependency, and not all of them are bad.  Although police and fire protection definitely make citizens dependent on ‘public assistance,’ such paternalistic support also increase the willingness of private individuals to embellish and add to their holdings.  Publicly funded education, when operating well, has the same effect.  It, too, is a form of state help designed to foster self-help.  The question is not how to eliminate state intervention, but how to design welfare programs to enhance autonomy and initiative.”

My family and I finished up the summer with an extended long weekend visiting my mother in the Bronx.  We took the time to explore New York and have a lot of fun.

On our final day, we visited the New York Botanical Gardens and the Bronx Zoo, both in Bronx Park.

The famed black squirrels of the Bronx

Pumpkinhead stick figure on the march.

Bird in the aviary 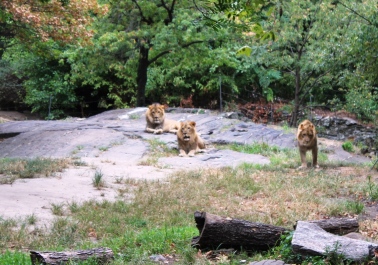