We enjoyed a five-day whirlwind tour of the Sunshine State including visits to Walt Disney World’s Animal Kingdom and Magic Kingdom theme parks, a spring training game at the Red Sox JetBlue Park, beach-side activities in Lauderdale-by-the-Sea, and an airboat tour at Everglades Holiday Park.

Here are some photo highlights. 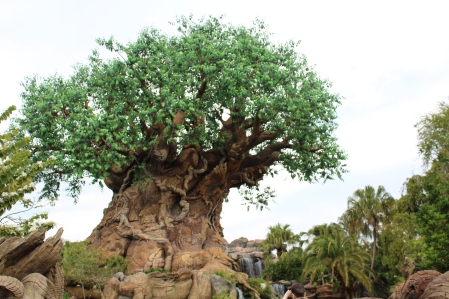 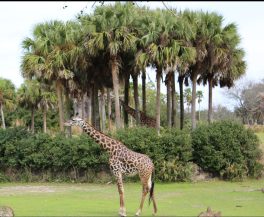 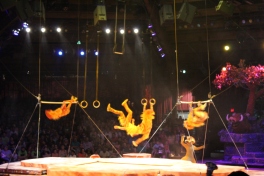 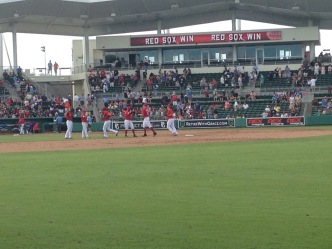 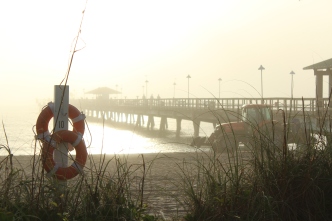 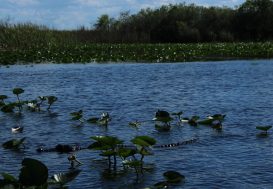 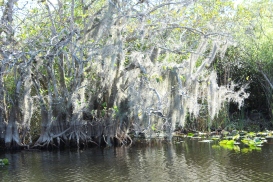 I did not read this cover to cover, for it is a massive tome containing information about all the Walt Disney World and Universal resorts – theme parks, attractions, hotels, dining, shopping, and more – but I did find it useful for the portions relevant to planning my own trip.  The distinctive feature of this guidebook is the touring plan, suggested itineraries that take one through the attractions at the theme parks in a way to best avoid long waits in line based on collected data.  The book also includes lots of tips submitted by readers offering contrasting perspectives from the authors.

Author: Taras Grescoe
Title: The Devil’s Picnic : Around the World in Pursuit of Forbidden Fruit
Publication Info: New York, NY : Bloomsbury Pub. : Distributed to the trade by Holtzbrinck Publishers, 2005.
Previously Read By Same Author: The End of Elsewhere: Travels Among the Tourists and Straphanger: Saving Our Cities and Ourselves from the Automobile

In Grescoe’s travel books he seeks out a specific theme for his travels.  In The End of Elsewhere he deliberately sought ought the most touristed spots across the Eurasian landmass and in Straphanger he rode the world’s best metro systems seeking solutions for cities.  In The Devil’s Picnic, the theme is prohibition and Grescoe travels the world to make a meal of food, drink and other consumables that have been banned or severely restricted in different parts of the world.  The menu includes moonshine in Norway, poppy seed crackers and chewing gum in Singapore, bull’s testicles in Spain, smoking in San Francisco, absinthe in Switzerland, mate de coca in Bolivia, and assisted suicide in Switzerland (the one thing the author does not sample).  Many of these items are banned out of concerns of morality and health, but Grescoe notes the arbitrary nature of prohibition and the damages on society and individuals that arise when resources are dedicated to legal enforcement rather than treatment, and forbidden fruits are only available through criminal organizations.  Similarily, there’s the hypocrisy of some substances such as caffeine being considered “harmless” and commonplace, something Grescoe attributes to it being a productivity drug that benefits a capitalist system. At times Grescoe comes off as a jerk, like when he deliberately chews gum in Singapore trying to provoke a reaction, knowing that a white Westerner will not be punished like a local.  But largely this is a thoughtful book on where the lines should be drawn between self-determination and societal protection.
Recommended books: Fast Food Nation by Eric Schlosser and The Global Soul by Pico Iyer
Rating: ***1/2

Title: Lilo & Stitch
Release Date: 2002 June 21
Director: Chris Sanders and Dean DeBlois
Production Company: Walt Disney Pictures
Summary/Review: A big leap forward in time from Dumbo, but coincidentally this movie was actually inspired by Dumbo in that the filmmakers wanted to make a low-budget experiment and is also the first Disney animated film to use watercolor backgrounds since Dumbo.  The story involves Stitch, a genetic experiment designed to cause mayhem who escapes and crash lands in Hawaii.  There he meets Lilo, a young girl being raised by her older sister after the death of their parents, who is an outcast among the other kids and tends to lash out violently, not unlike Stitch.  The movie takes some chances in setting it in Hawaii and incorporating Hawaiian culture as well as a starkly honest depiction of a sisterly relationship.  The movie is laugh out loud funny and heartbreaking, and I can’t believe I waited 15 years to see this genius film.
Rating: ****1/2

A baby is born with a physical feature that leads him to be ostracized by his kind, but after discovering that that physical feature affords him special powers, he is celebrated. Dumbo is essentially the same story as Rudolph the Rednose Reindeer.  The animation style is different from Pinnochio.  The former tried to recreate reality in intricate animation, while Dumbo is more cartoon-y.  But the elephants are lovingly-executed and given characteristics to make them both elephantine and anthropomorphic.  And Dumbo is just so darn cute.  Timothy Q. Mouse is the hero of this story and is much like Jiminy Cricket, taking Dumbo under his wing and helping him find his greatness.  Like Pinnochio, there’s a lot about this movie that is just plain weird – like how Dumbo and Timothy discover that Dumbo can fly after consuming champagne.  The scene with the crows is uncomfortable because of the racial insensitivity of the obviously African American characters, but the crows also have the most memorable lyrics of any song.  After nearly an hour of bullying and ostracizing our protagonist he gets the happy ending he deserves, but this sure is a sad movie.
Rating: ***

Pinocchio is one of those movies where you feel like you know the story even if you’ve never seen it.  But actually watching it fills in some gaps and reveals some misconceptions.  The most famous part of Pinocchio is that his nose grows when he lies.  And that lasts less than a minute.  Still there reasons why the film is so familiar because the scenes of Pinocchio, Jiminy Cricket, Geppetto, Figaro, and Cleo dancing have been shown in a gazillion formats, most memorably to me edited into the DTV music videos that were always shown on The Disney Channel when I was a kid.  And they’re worth showing off, because the Disney animators made some remarkable advancements in the depiction of the movement of bodies as well as shadows and water.  Nothing prepared me for the nightmare fodder that was Pleasure Island and the children turning into donkeys.  And the film carries such a heavy-handed middle class morality that it makes it seem like they want us to think that the kids deserved that.  The final act seems tacked on where Pinocchio learns that for some reason Geppetto, Figaro, and Cleo are in the belly of the whale Monstro, but it does give Pinocchio the chance to be a hero.  A strange and remarkable film.
Rating: ***1/2

Today is the 70th anniversary of Edwin Land’s first demonstration of the Land camera introducing instant photography to the world. I’m currently processing a collection of Polaroid Corporation records related to Land at my place of work, so these historic moments on my mind.

My first camera as a child was a Polaroid 600-type, so somewhere I have many Polaroid photographs, most of them out of focus and poorly framed, but I don’t where they are except for one.  So on this momentous anniversary, enjoy my photograph of Shea Stadium from September 1986.

Soon I will be traveling with my family to Walt Disney World in Florida.  I’ve previously visited Walt Disney World on three occasions (1976, 1981, and 1982) as well as once visit to Disneyland in California in 1980. So it’s been 35 years since my last visit to a Disney park, and my have things changed.

When I last visited, there was just the Magic Kingdom and some hotel resorts.  EPCOT was under construction and Disney Hollywood Studios and Animal Kingdom were not even on the drawing board.  This guide and the film below show what it was like on my last visit (kind of disappointed we didn’t take advantage of the free loans of Polaroid cameras!).

Growing up in the 70s and 80s meant a different relationship with Disney than the generations before and after.  The classic animated movies were re-released to movie theaters from time to time, but weren’t shown on television (even on cable) or available on video until the late 80s, when I was a teenager and not as interested.  I do remember seeing Snow White and the Seven Dwarfs in a stage adaptation at Radio City Music Hall, but other than that it was The Wonderful World of Disney and later The Disney Channel that provided glimpses of classic Disney films.  Meanwhile the Disney studios were going through a troubled period and while I loved The Fox and the Hound, most of the movies released in the 1970s and 1980s were not very memorable.  Kids who grew up during the Disney Renaissance starting in 1989 don’t know how lucky they had it.

So in a strange way, the parks were the main thing for Disney when I was growing up.  There were all these rides and characters based on movies we never saw and vaguely knew the plots.  People dressed as characters have always been part of Disney World, but planning for this trip I’m surprised to learn that they no longer walk around the park greeting visitors but instead it is required to queue up for “character experiences” and even pay good money to have diner with characters. It seems strange to me but apparently it is an extremely popular thing to do.  Luckily, my kids are interested in going on rides, which I think is much more fun.

With that in mind, here are ten things I loved at Disney as a kid.  It will be fun to see what lives up to memory, and what new things will join the list.

To prepare for our visit, I’m going to try to watch some animated Disney movies I’ve never seen before, so you’ll be seeing my reviews here.

I’m taking a photography class and needed to practice taking portraits.  The gorillas at the Franklin Park Zoo proved to be agreeable subjects. 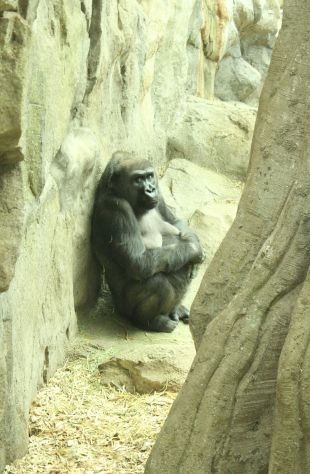 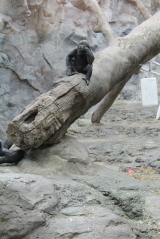 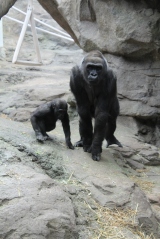 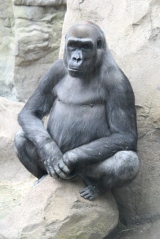 The American Experience documentary adapts a portion of the book by Doug Most relating to Boston’s effort to create America’s first subway.  As a Boston partisan myself, why not leave out the portion of the book about New York City, even if they built a far more extensive subway system very swiftly after Boston’s first tunnel opened?  Kidding aside, it is a dramatic figure focusing on key figures such as Frank J. Sprague, who invented the electric trolley car, and Henry Melville Whitney, who consolidated the trolley lines into the West End Street Railway Company and persuaded city officials to approve the first tunnel.  There are challenges along the way including negative popular opinion, graves of Revolutionary War era soldiers, and an explosion, but the subway is completed and convinces the doubters.  The documentary is well-illustrated with photographs and vintage film, and is a delight to watch.
Rating: ***