I visited my mother in New York this past weekend and together we celebrated St. Patrick’s Day in traditional and unique ways.

The weekend began with a Big Onion Walking Tour of the Lower East Side area once known as Little Ireland.

We met our guide Erin at St. Paul’s Chapel, and although her name was appropos to the day, she told us she was not actually Irish.  The St. Paul’s churchyard has a memorial – but not the actual grave – of Thomas Addis Emmet. He was the elder brother of famed Irish martyr Robert Emmet, and participated in the rebellious United Irishmen in the 1790s.  Exiled to the United States, he did pretty well for himself, and even became New York Attorney General. 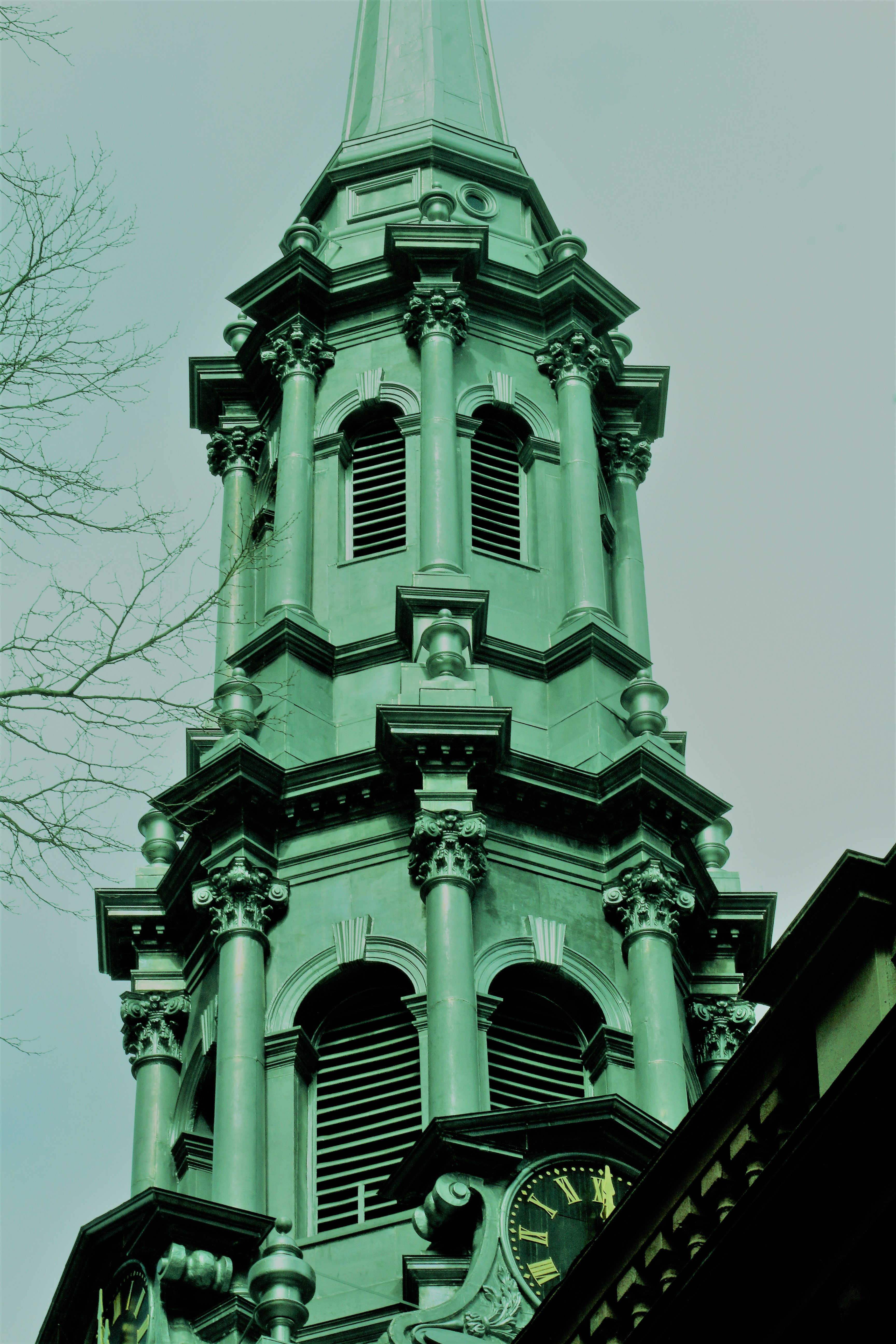 The next stop was at St. Peter Catholic Church, the oldest Catholic parish in New York, established in 1785.  The current church building dates to 1840. 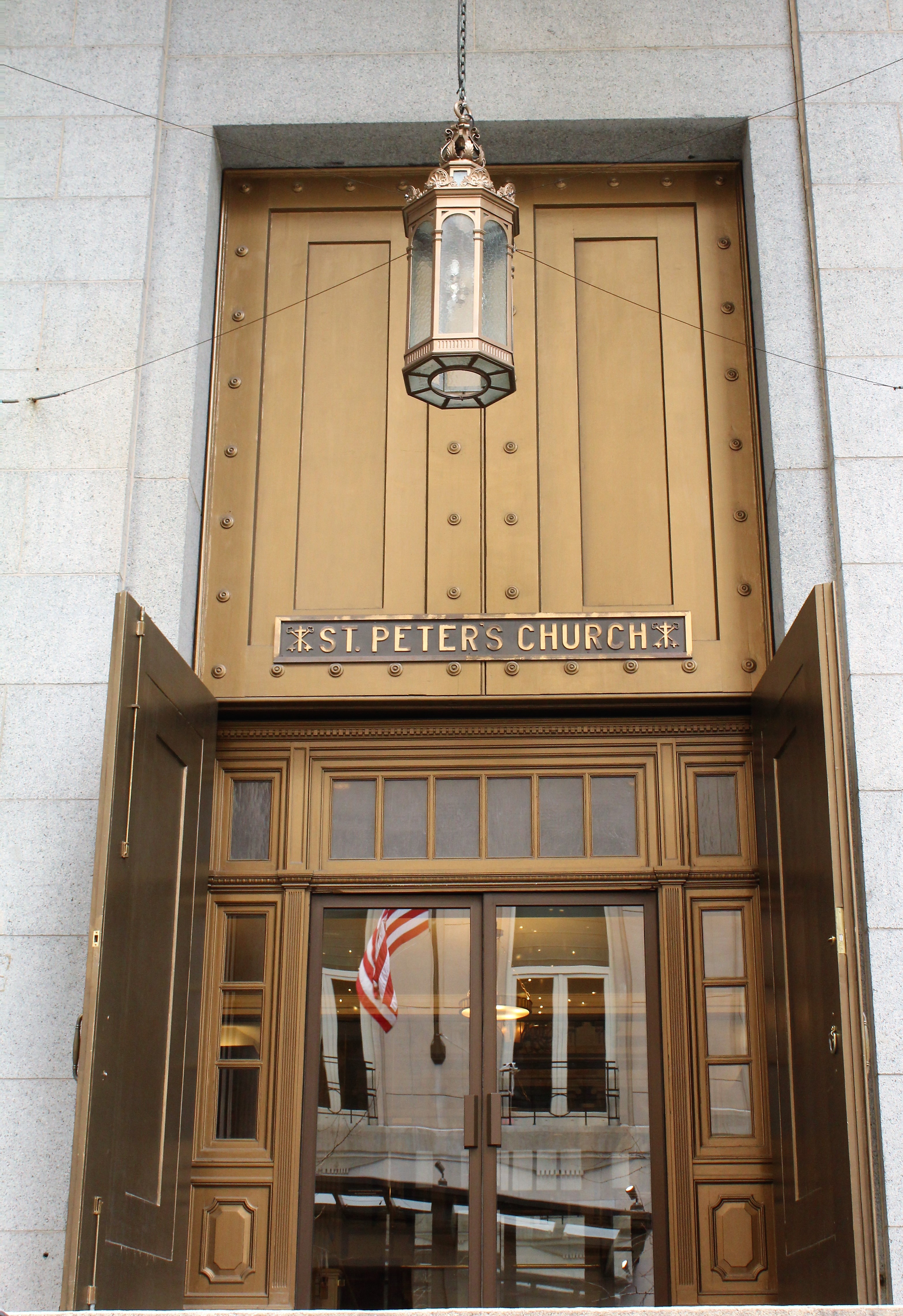 The Marble Palace is under scaffolding right now, but it is a historic landmark that once held America’s first department store. Opened in 1846, it was home to Alexander Turney Stewart’s dry goods store.  Stewart was an Irish immigrant made good. The store provided same day tailoring of clothing thanks to dozens of seamstresses working on the top floor, many of them recent immigrants from Ireland. 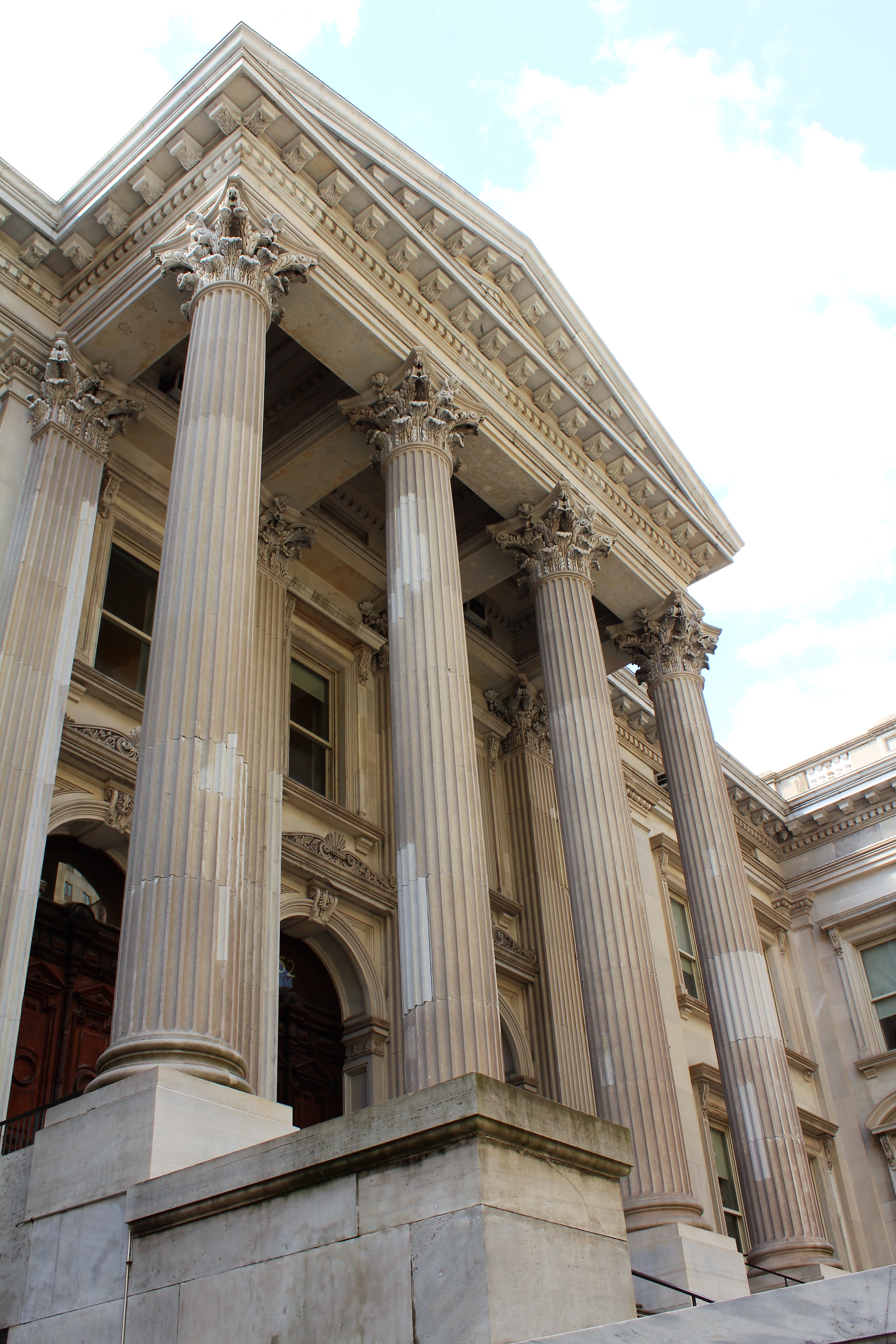 The Tweed Courthouse is associated with the graft of Tammany Hall, the powerful political machine that was initially nativist but grew to welcome Irish Catholic immigrants in return for votes.  Across the street is the former home of Emigrant Industrial Savings Bank, founded in 1850 by the Irish Emigrant Society to protect the savings of newly arrived immigrants. 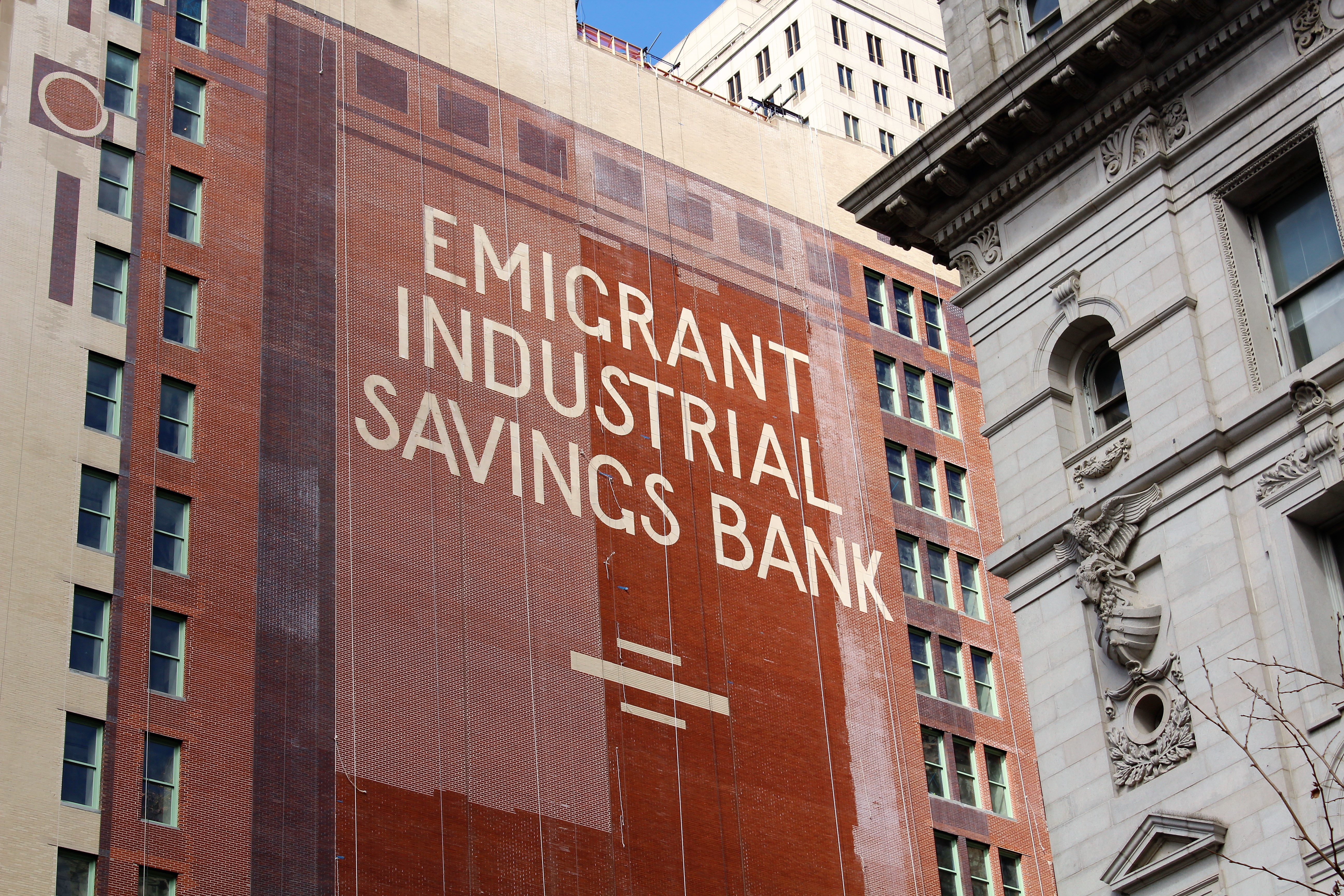 We took a brief tangent from Irish history to discuss the African Burial Ground, which was pretty cool.  Nearby in Foley Square, in the midst of a rally opposing discrimination against Muslims, we talked about one of New York’s first suburbs, built on the site of the Collect Pond which was drained in 1811 through a canal at what is now Canal Street.  Since it was a natural spring, the water returned, making the houses unstable.  As the wealthy moved out, the poor occupied the abandoned houses and created New York’s first slum.  A short walk away in a Chinatown playground, we talked about Five Points, the notorious neighborhood known for its mid-19th century gang violence.  But it was also a place where Irish immigrants and free blacks got a toehold in the city, and even invented tap dancing!

On Mott Street, the Church of the Transfiguration shows the immigrant heritage of the neighborhood.  Initially a place of worship for the growing Irish community in the 1840s, by World War I it was a largely Italian parish, as the names on the World War I memorial plaque indicate.  Today the church serves a Chinese Catholic community. 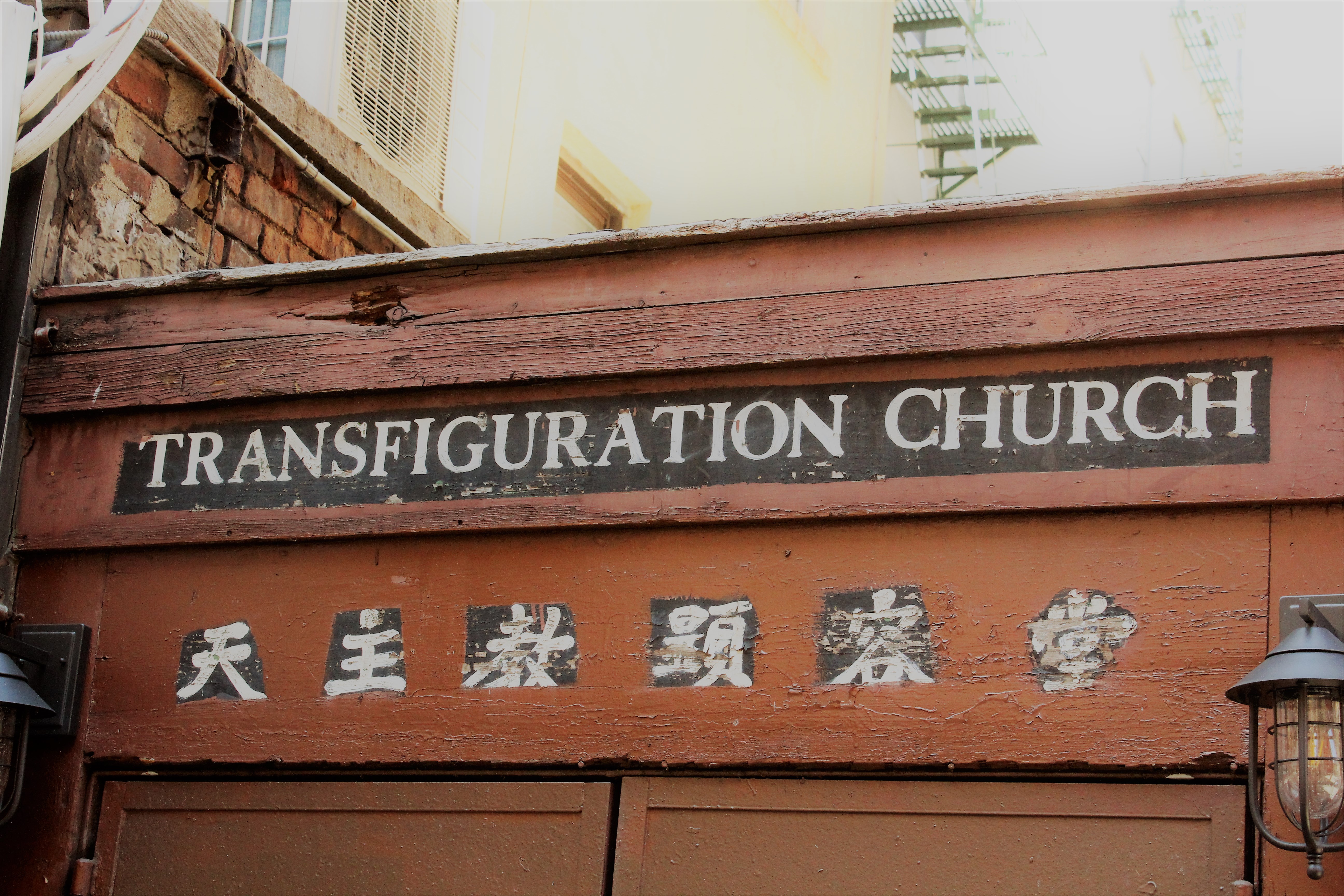 Another fascinating diversion from the Irish theme was passing by the Spanish and Portuguese Sephardic Jewish Graveyard, which is associated with Congregation Shearith Israel, the oldest Jewish congregation in the United States, founded in 1654! 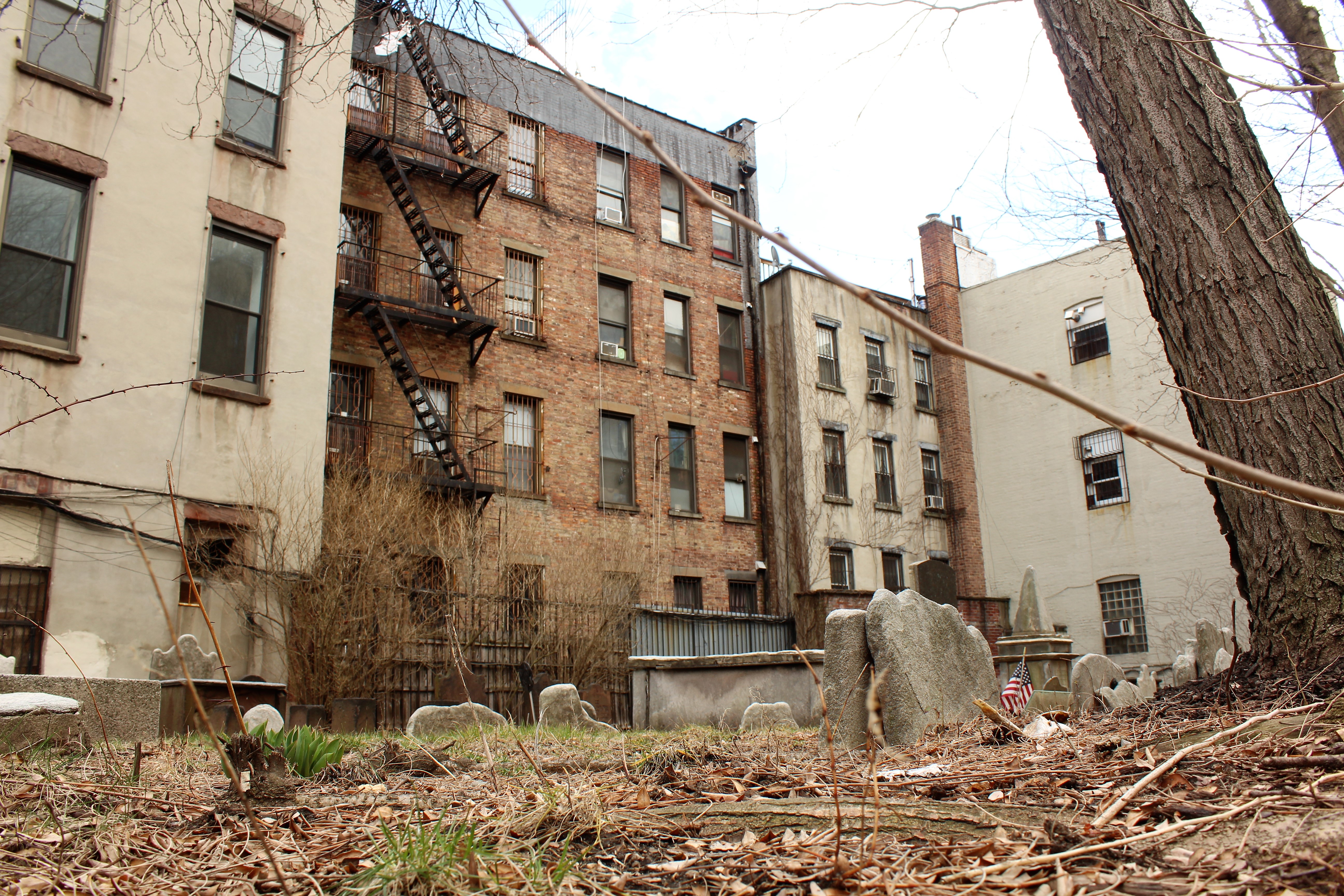 Around the corner, we visited another Roman Catholic church, St. James, where the Ancient Order of Hibernians was founded in 1836. 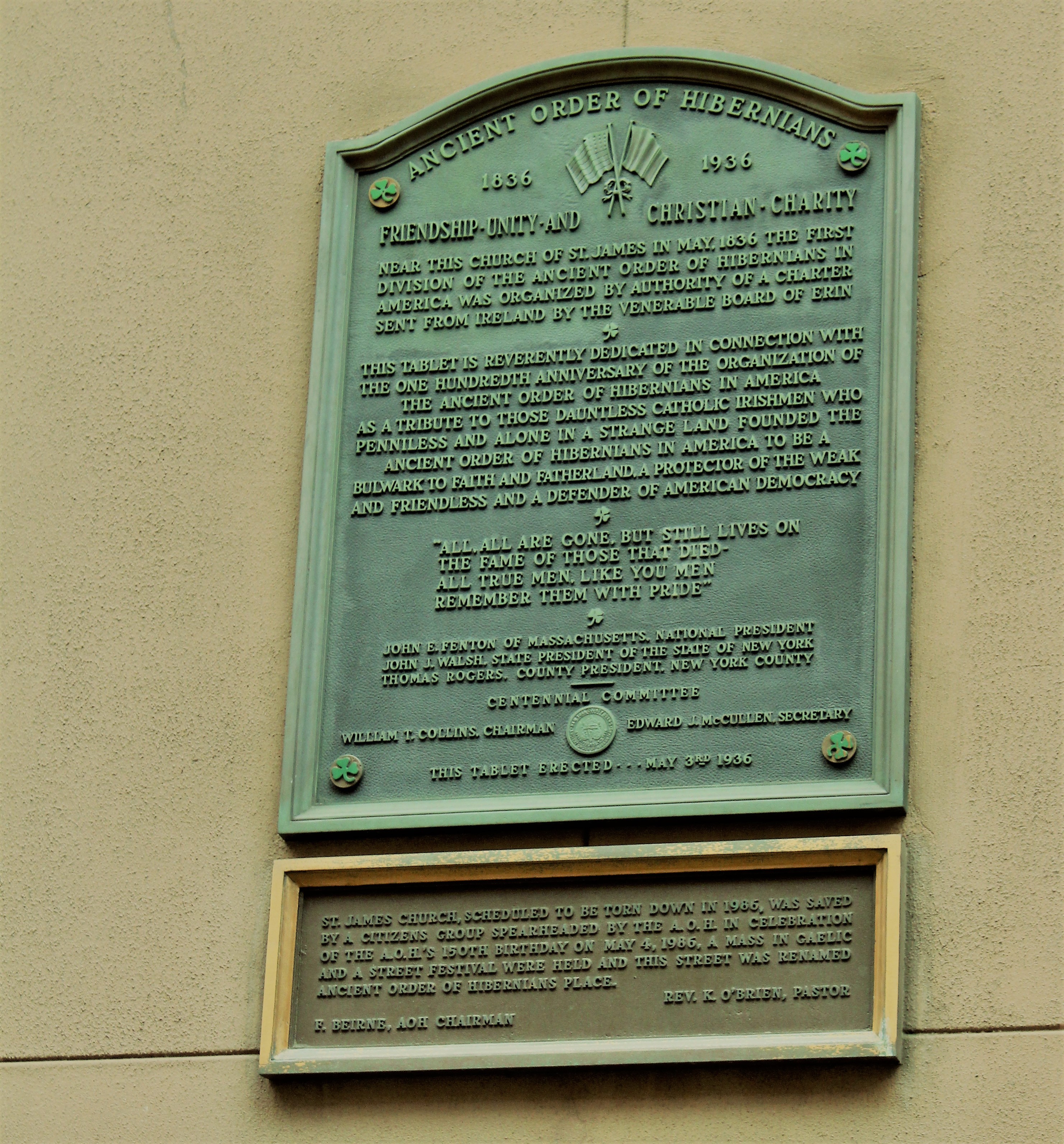 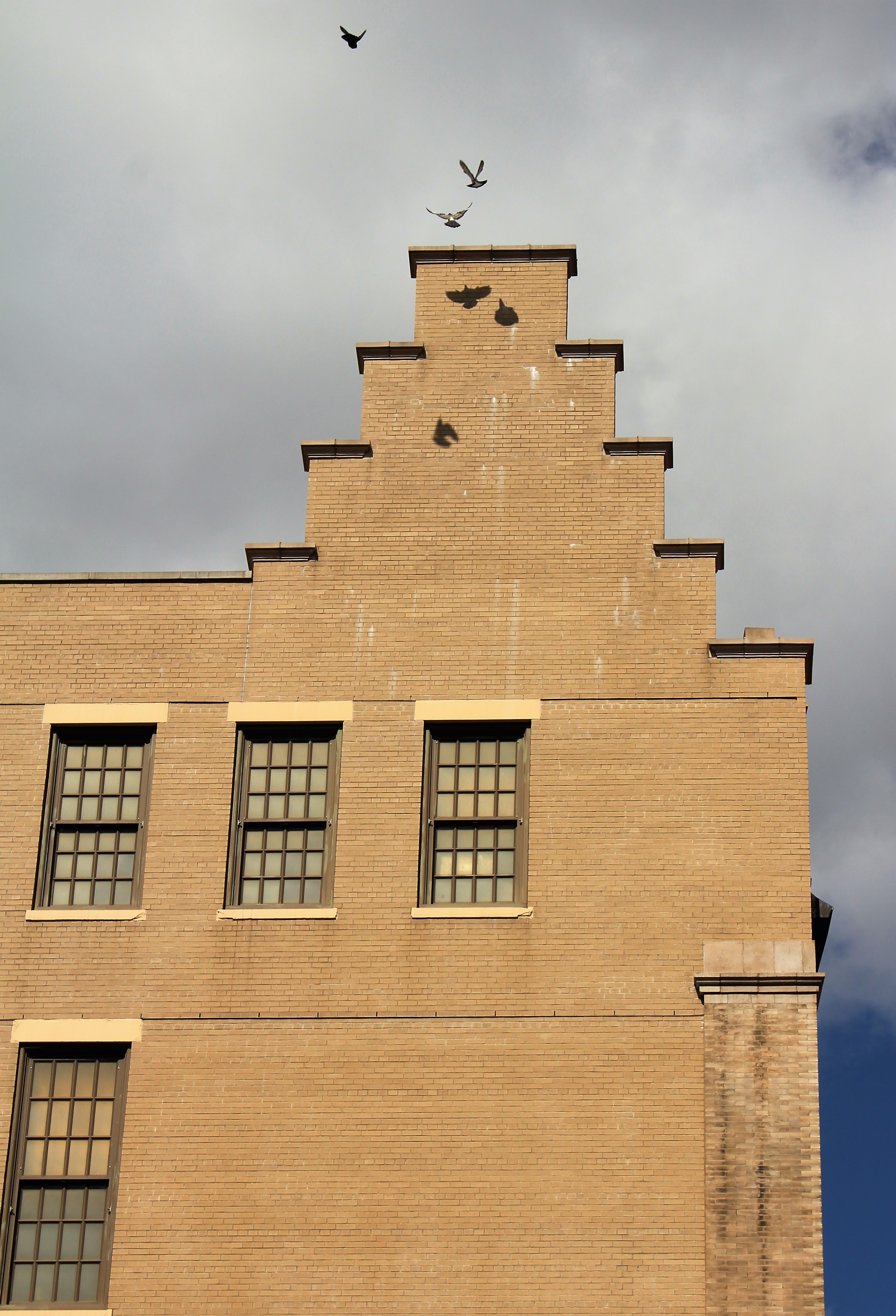 We stopped by Public School 1 to talk about how Irish Americans had their children educated.  Erin also noted the architectural design of the school pays tribute to New York’s Dutch heritage.  In the heart of Chinatown, we talked about the Chinese Exclusion Act and how an Irish American woman could lose her citizenship if she married a Chinese man. At the final stop, we discussed the notorious riot brought on by the conflict between two street gangs, the Irish American Dead Rabbits and the nativist Bowery Boys.

Finishing our Irish tour in the heart of Chinatown, we of course had lunch at Thai Jasmine.  It was yummy.  Then we headed uptown to see part of the St. Patrick’s Day Parade. I hadn’t been to the parade since in 22 years, but had a lot of nostalgia for my childhood when it was an annual event.  We remembered the year when the wind was so strong it blew wooden police barriers down the street like tumbleweeds, and told stories of family friends we met at the parade.  I was impressed that the pipe and drum bands have significantly more women than in my childhood, and that black and latinx people were in the parade as participants as well as spectators, making it a much more diverse celebration than it used to be. 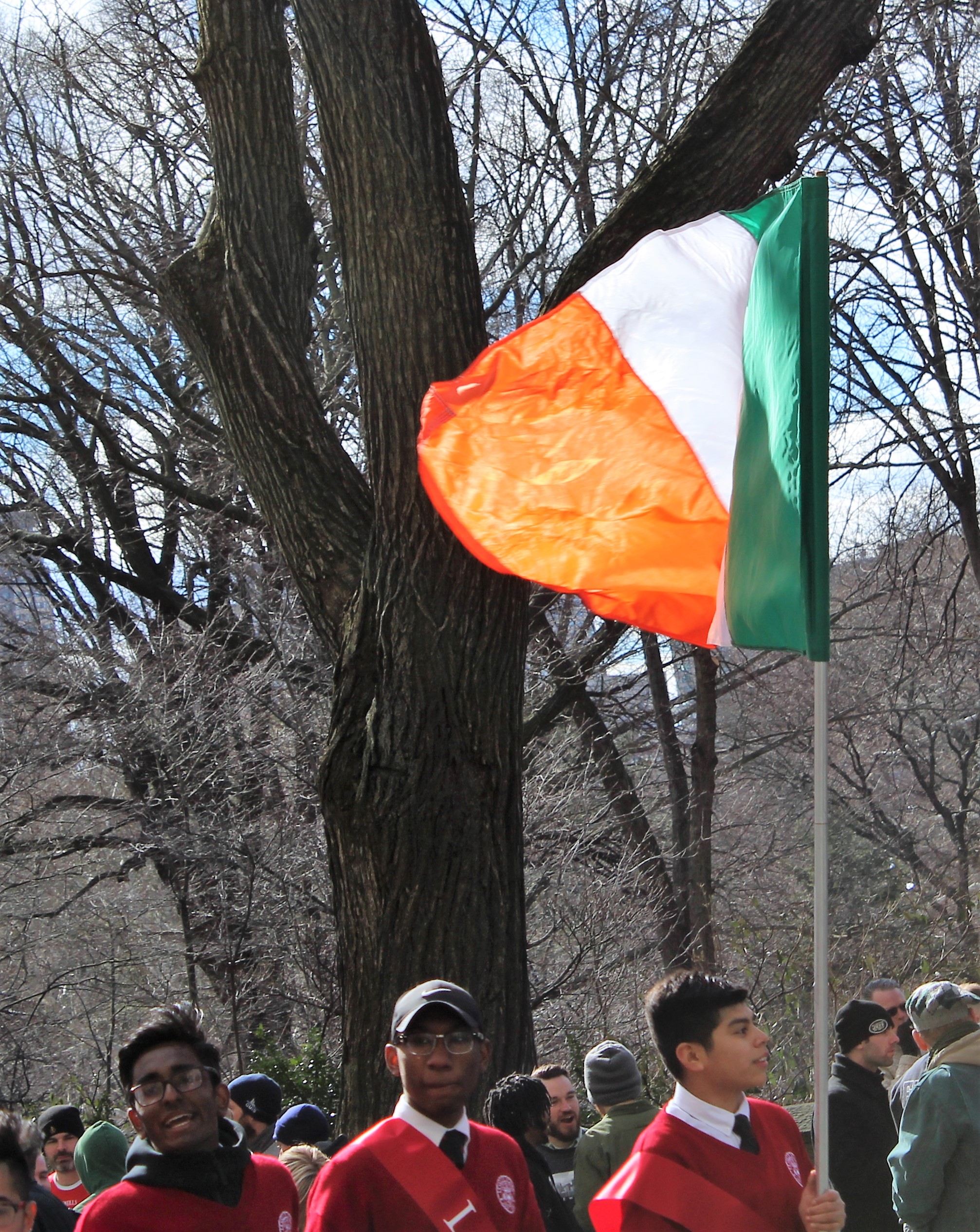 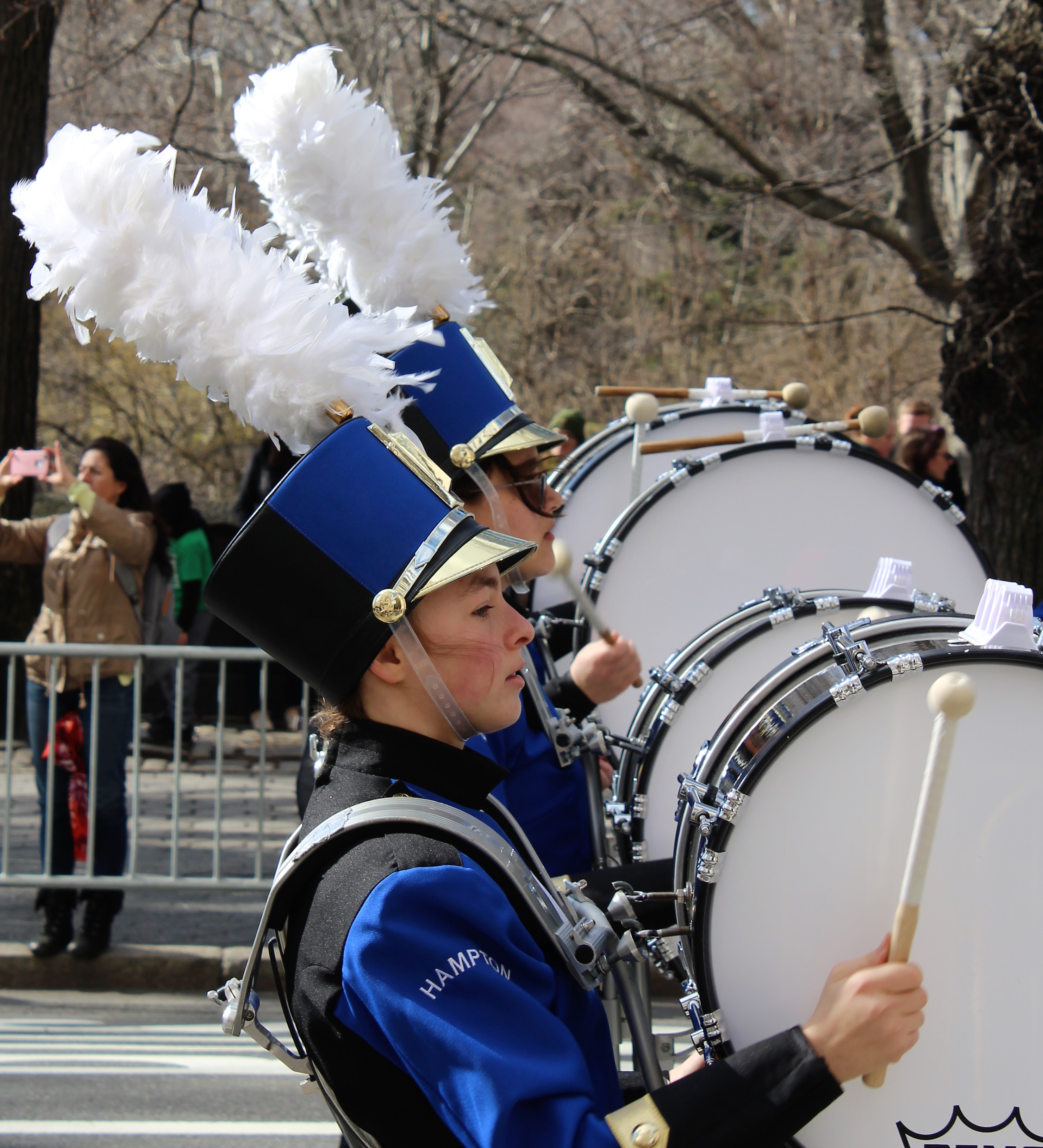 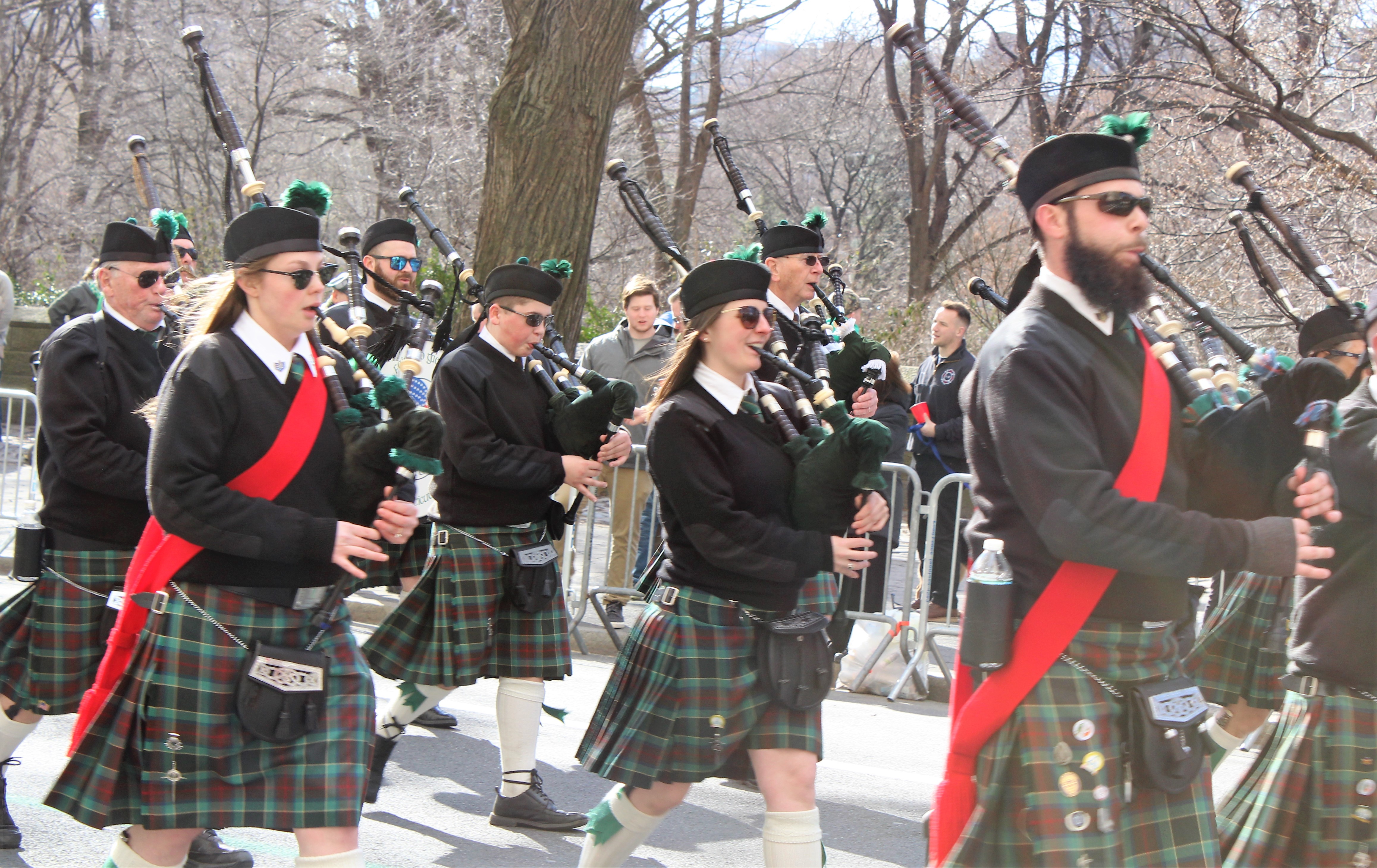 The crowds were light and I didn’t witness any misbehavior, which was also a plus, although it may have been due to the fact that we arrived late in the day and were way uptown.  When the winds got too chilly, we decided to drop in the Metropolitan Museum of Art for an hour or so.  We wandered into a gallery of art from New Guinea, which was fascinating, and definitely not anything I’d ever seen before. 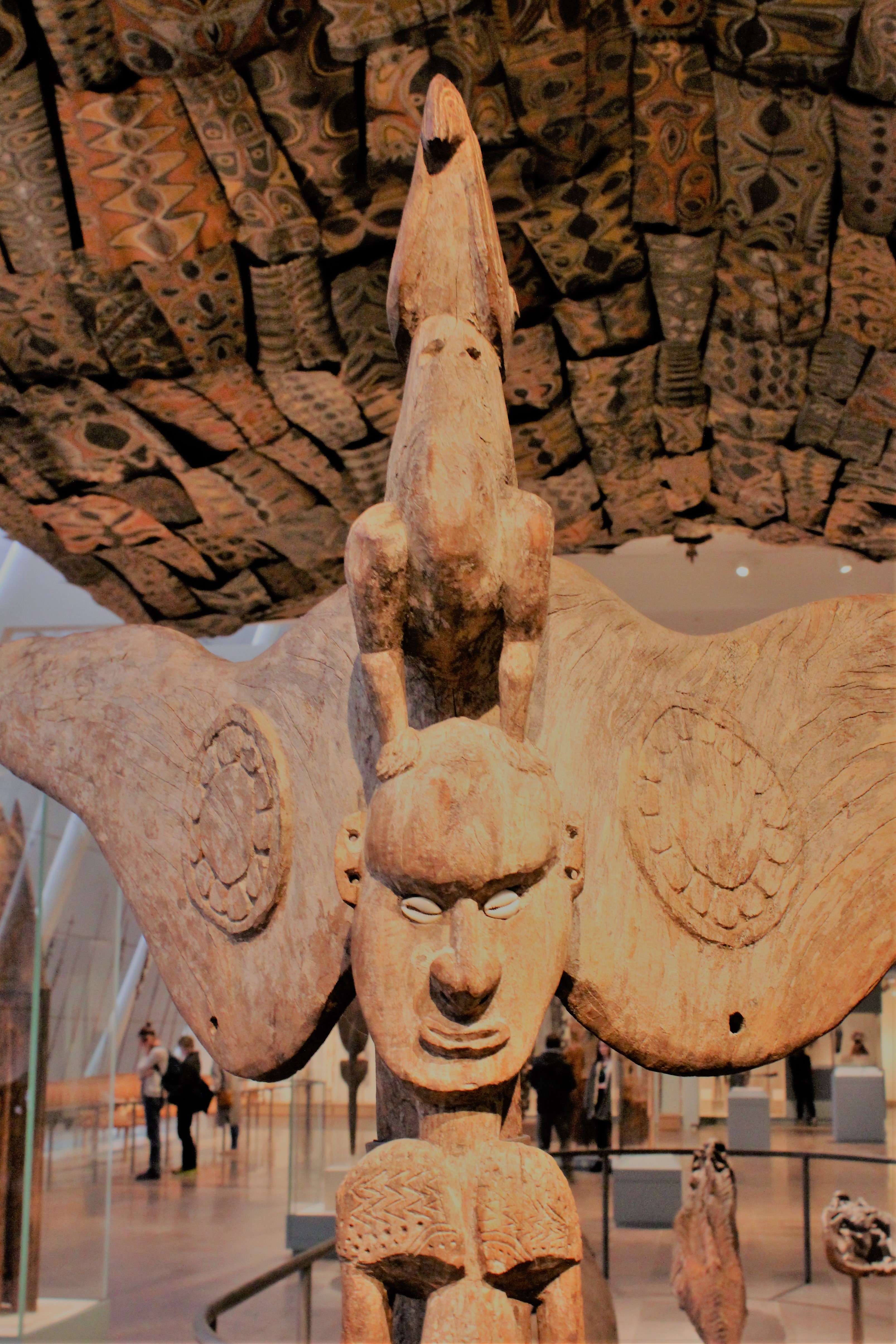 If the day wasn’t full enough already, we finished things of with a performance by the New York Philharmonic, who played Mozart’s Requiem, but only the parts that Mozart wrote.  I had a peaceful half-nap to the music in the first half of the perfomance.

On Sunday, we went to the New York Botanical Garden for the Orchid Show.  There were significantly fewer orchids on display than last year, and the greenhouses were very crowded, but it’s always a lovely place to visit regardless.

I like how these two photos turned out.  One is a picture of the dome of the greenhouse, the other is the reflection of the dome in the water.

To finish out a proper St. Patrick’s Day, we went to An Beal Bocht Cafe in the Riverdale neighborhood of the Bronx.  They had sweet Guinness poured properly and musicians playing a traditional Irish seisiún (although they snuck in a couple of crowd pleasers like “The Wild Rover”).  It was crowded but friendly and definitely a place I’d like to visit again, albeit it’s a steep climb uphill from the subway station!

Let the spooky season begin with some mysterious potions!
Heard a noise on the back porch and found a squirrel. This strikes me as unusual squirrel behavior.
Earliest autumn.
Howdy.
Patch of sky.
Playoff Bound!