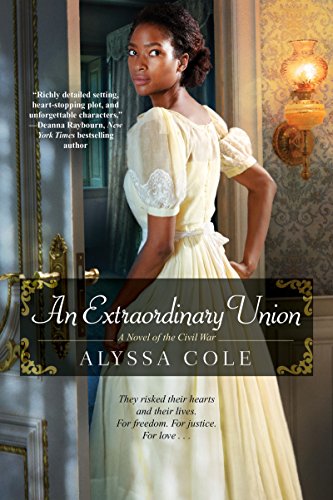 Set in the early days of the American Civil War in Richmond, Virginia, this historical romance tells the story of two spies for the Union working undercover behind enemy lines. Ellen Burns is a freed woman with a photographic memory who disguises herself as a mute slave and is hired out to the estate of a Confederate Senator. Malcolm McCall, a Scottish immigrant, works as a detective for the Pinkertons and poses as a Confederate soldier.  Together they uncover a Confederate plot to build an ironclad ship that could break the blockade of Southern ports.

Upon meeting and discovering that they’re working on the same side, the pair find a mutual attraction.  Malcolm is more overt in trying to act on that attraction, getting quite rude and handsy, which makes this book uncomfortable.  I appreciate that the author clearly will not let Malcolm coast as a “noble abolitionist” but calls out the power and privilege he has as a white man and how that is a threat to Ellen even when he has good intentions.  Both characters are well developed and interesting people.  Even a major antagonist, a loathsome Southern Belle named Susie McCaffrey, turns out to be more complex than she initially appears.

Of course, Ellen and Malcolm have lots and lots of sex, which I find awkwardly worded, but that may be just me.  Nevertheless, this is a well-written and engaging novel touching upon mystery, adventure, history, and social change.

“Malcolm’s mind got muddled with anger thinking of how, in these lands, institutionalized sin was seen as a way of life that needed defending.”