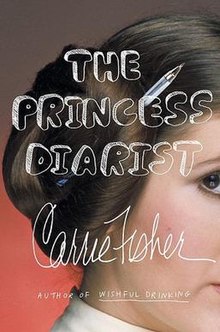 The late, great Carrie Fisher reflects on her life as it’s shaped by her most famous character, Princess Leia Organa. Fisher begins with growing up with her celebrity parents (and seeing their celebrity diminish) and not really wanting to go into acting.  Nevertheless, she gets a part in the movie Shampoo and enrolls in London’s Central School of Speech and Drama.

She tells the story of her Star Wars audition – which oddly enough was a 2-for-1 audition before George Lucas and Brian Depalma for both Star Wars and Carrie. What would the world be like if Carrie had played Carrie in Carrie? Her experience filming Star Wars which involved rising early to spend intimate hours with the hairdresser Pat to get the ridiculous buns.  She also relates that she and Harrison Ford had a fling even though he is much older and was already married at the time.

Despite the title, the book is mostly memoir rather than actual diaries, but a segment of Fisher’s diary is included at the time of her relationship with Ford, which she calls “Carrison.” It was quite a jarring shift to move from the Fisher’s recollections from 40-years later, filled with self-deprecating humor, to the raw emotion of her 19-year-old journals.  Oddly, this portion is read on the audiobook by her daughter, Billie Lourd, perhaps to give a younger voice to the journals, or maybe they just wanted to make her deeply uncomfortable (and the listener by proxy) reading about her mother’s sexual relations.

The later half of the book deals with life after Star Wars became a hit, starting with the whirlwind press junket Fisher, Ford, and Mark Hammil went on to promote their low-budge movie as it became an unprecedented phenomena.  Fisher remains awed by fans’ dedication to Leia and the weird interactions she has with them. She refers to participating in conventions where fans pay money and line up for autographs as “lap dances.”  And the text includes perhaps real or perhaps exaggerated conversations with fans.