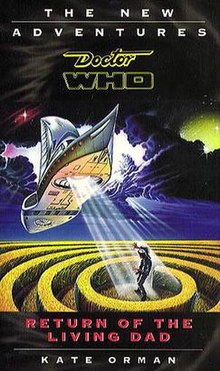 In this story, Berenice returns with her newlywed husband Jason to investigate what became of her father.  It’s long been believed that Admiral Isaac Summerfield turned coward in a space battle against the Daleks and died, but new evidence suggest otherwise. Berenice asks the Doctor to use the TARDIS to witness the battle and see that her father’s ship is sucked into a wormhole.  Following through, the TARDIS team arrives in a remote English village in 1983.

Isaac and his crew are not surprised to see the Doctor and Berenice, as they’ve been expecting them to arrive one day.  Isaac’s ship arrived 20 years earlier, and in the intervening years he’s opened a cafe and taken up the duty of cleaning up the messes left behind by UNIT and the Doctor himself.  With an Air Force base nearby with nuclear weapons, the village attracts a strange assortment of refugee aliens, paranormal investigators, and anti-nuclear protesters.  Of course, once the Doctor arrives, strange things begin happening as the TARDIS and several people go missing. There’s a mystery to be solved and a traitor or two in their midst.

Kate Orman is one of the best writers of Doctor Who and particularly good at getting at the humanity (or lack thereof) of her characters and their relationships.  It’s surprising that she’s never written for the television series like other New Adventures writers, but perhaps she’s just not keen on scriptwriting.  Nevertheless, aspects of the book are familiar to what would be picked up ten years later in the new tv series, such as the need to clean up after the Doctor’s adventures, and the nodding winks to fan culture.

Since this is an Orman novel, it also has approximately a gazillion characters and it does get hard to keep track of them all.  I kept forgetting the Doctor’s other companions, Roz & Chris, were even there, and their main plot is their getting romantically involved.  Berenice, who had left the Doctor in Happy Endings, is front and center and this book is very much setting up her own series of New Adventures that would start in 1997.  Indeed, in various media, Berenice Summerfield is still appearing in new stories through today.

Other Doctor Who Virgin New Adventures

I need to work on my Sam the Eagle cosplay.
Pins.
Didn’t Richard Burton and Peter O’Toole already do this?
Enjoying a spring day on the porch.
Cargo.
First Fenway outing off 2022.