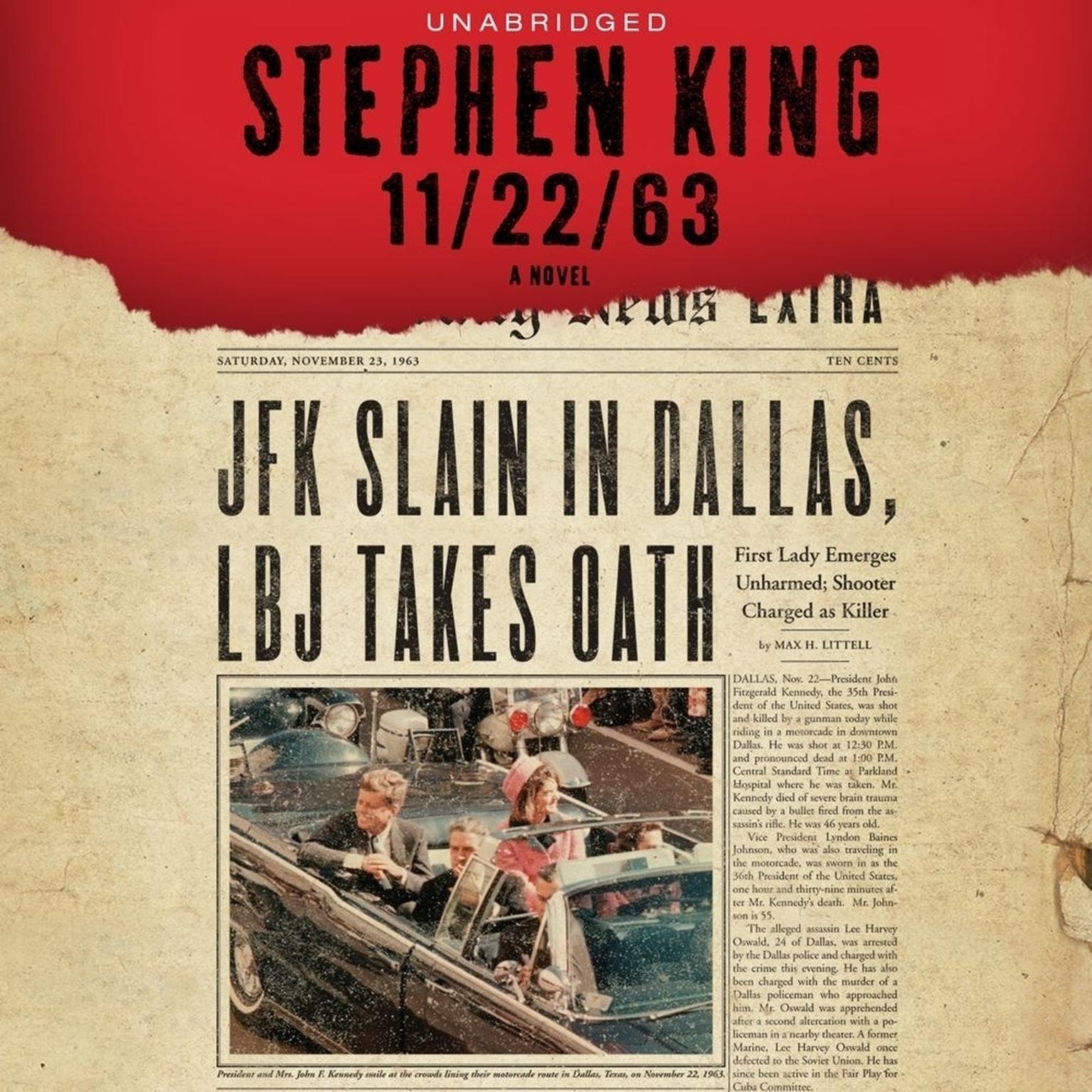 Stephen King’s time travel adventure focuses on Jake Epping, a recently divorced high school English teacher in Maine, who is drawn into a plan to prevent the assassination of John F. Kennedy. His friend Al, owner and cook at a greasy spoon diner, discovered a “rabbit hole” to 1958 and has been using it to try to prevent Kennedy’s assassination in 1963, but he comes down with a fatal cancer and is unable to complete the mission.  So he returns to 2011 and recruits Jake to take over.  Al’s hope is that if Kennedy lives that it will have the knock-on effect of preventing the escalation of the War in Vietnam.

Jake decides that to test the effects of changing history, he will rescue the family of high school janitor and his G.E.D. student, Harry Dunning. On Halloween 1958, Harry’s alcoholic father murdered his mother and siblings and left him with permanent brain damage and a limp. A good portion of the early part of the book takes place in Maine in 1958 as Jake adjusts to living in the past and trying to prevent the Dunning murders.

Later, Jake moves on to Texas and settles in the fictional Dallas suburb of Jodie. With years to go before the Kennedy assassination (or even Lee Harvey Oswald’s return to the United States from the Soviet Union), Jake becomes a substitute high school teacher and director of the school’s theater productions.  He meets and falls in love with the school’s new librarian, Sadie Dunhill and becomes a beloved member of the town community.

I really enjoy the parts in Maine and Jodie as it focuses on the small details of everyday life in the past and Jake’s efforts to fit in.  King does not glamorize the past but demonstrates its strengths and weaknesses.  On Jake’s visit, for instance, he observes that the past smells terrible (because of the mills in Maine) but tastes great (real root beer at a diner).  The mundanity of everyday life becomes a fascinating world to explore for the person from the future. King also builds tension with examples of the “obdurate past” throwing up obstacles to Jake’s efforts to change it and the many coincidences which Jake refers to as “the past harmonizes.”

Unfortunately, when Jake finally focuses on the Kennedy assassination, the narrative becomes less interesting to me.  Especially dreadful are the seemingly endless passages of Jake listening to Oswald’s everyday conversations through an audio surveillance.  King runs up against the challenge that faces all writers of time travel fiction: you can change major events in history in fiction, but they remain the same in real life. And so they have to find some way to justify leaving the past unchanged.

Back to the Future seems to be the only time travel story to ever consider that changing the past would make the future better.  King rather obviously makes the future where Kennedy survives a (ridiculously) worse place.  This is an unsatisfying payoff after a lengthy book.  It’s still worth reading though, as again, at least the first two thirds of the book are very engagingly written.  And the characters of Jake, Sadies, Harry, and others are sympathetic enough that my interest in seeing how they turn out carried me through the final act.  I also highly recommend Craig Wasson’s audiobook narration because he is able to perform believable accents for both Mainers and Texans.