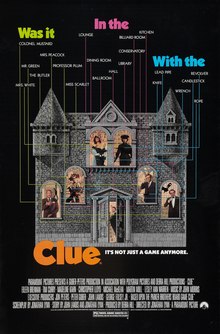 We played a game of Clue and then decided to watch the movie Clue.  The things you do while in isolation.  I saw this movie in the theater back when it first came out.  The gimmick at the time as that there were three different endings released to different movie theaters.  I saw ending C.  By the time it made it to video and television broadcasts (and now on streaming) all three endings are played back to back.

This is perhaps the first, but not the last, movie based upon a board game.  A comedy that parodies ensemble murder mystery movies while bringing in elements from the board game is a good premise. The movie has become a cult classic among Millenials, but I’m surprised at just how few laughs there are, especially considering the stellar cast.  The movie features Eileen Brennan, Tim Curry, Madeline Kahn, Christopher Lloyd, Michael McKean, Martin Mull, and Lesley Ann Warren. but only Curry gets some truly funny moments.  And most of those are held until the end(s) of the movie when he’s revealing whodunnit.

Knives Out did it all much better.

Cool kids on the train.
Duke Ellington Memorial by Robert Graham
Three Dancing Maidens by Walter Schott
Where the lines split.
Too much art.
American sculpture.