This is my entry for “H” in the Blogging A to Z Challenge. Throughout April I will be watching and reviewing a documentary movie from A to Z. Some other “H” documentaries I’ve reviewed are Harvard Beats Yale 29 to 29, Heima, Helvetica, Hieronymus Bosch: Touched by the Devil, High School,  Hillsborough, The Historic Pubs of Dublin, and The Hollywood Librarian.

I have an affinity for coal miners because my grandfather and his father and brothers all worked for mining companies in Pennsylvania.  My grandfather never went down in the mines but worked as a coal breaker which made him all the more vulnerable to inhaling dust and coal particles.  Coal miners, whether below the ground or in the processing facilities, face a great risk of instant death and horrible injuries. Those who make it through okay will inevitably suffer respirator problems like black lung.  And yet the work of a coal miner could also offer great dignity and pride.

In the 1970s in Harlan County, Kentucky, over 180 coal miners from the Brookside Mine joined the United Mine Workers of America and went on strike against the Duke Power Company.  Young filmmaker Barbara Kopple (who later directed Miss Sharon Jones!) filmed the strike over the course of its 11 months, including planning meetings, pickets, and conflicts with company’s “gun thugs” that lead to violence. The protests spread to New York where UMWA picketers inform Wall Street investors about Duke Power’s mistreatment of workers, and one of them talks with a progressive New York City cop. A particularly strong part of this film is the organization of Harlan County’s women, mostly miners’ wives, who play a significant role in the strike. Lois Scott stands out as a women who uses encouragement and shame to keep people motivated on the end goal of the strike.

In addition to the linear narrative of the strike, Kopple also includes historical footage from Harlan County coal mines and earlier labor conflicts.  The struggle of miners in Appalachia in general is seen in coverage of the Farmington Mine explosion in West Virginia in 1968 that left 78 miners dead.  There was conflict even within the UMWA.  In the 1960s, Tony Boyle became president of the union, but many rank-and-file miners saw him as too cozy with mine owners.  He was challenged by Jock Yablonski in 1969, and despite winning reelection had Yablonski and several of his family murdered a month later. At the time of the Harlan County strike, Boyle had been replaced by a former miner, Arnold Miller, and was convicted for the murder of the Yablonski.

Apart from some informative text on the screen, this movie has no narration.  Instead the miners tell their story and the stories of those who came before them.  The story is also told through song, as the soundtrack features several folk songs including many specifically about Harlan County.  At one point, Florence Reece appears to sing a new version of her famous song “Which Side Are You On?” which she originally wrote for the Harlan County War in 1931.

This is a beautiful, moving, and enraging movie that tells a story that’s all too familiar through our nation’s history. 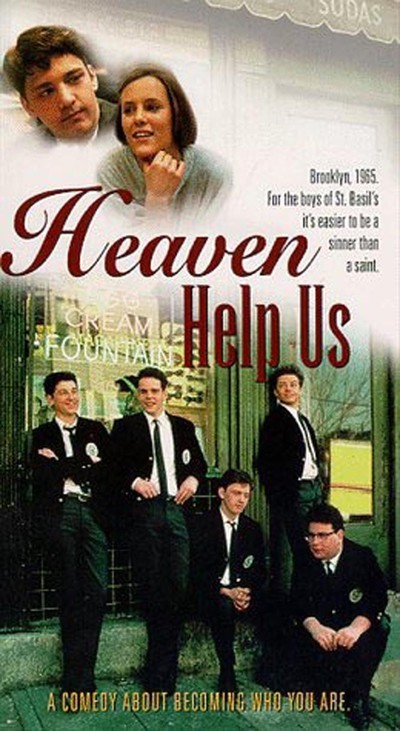 After the death of his parents, teenager Michael Dunn (Andrew McCarthy) is sent to live with his grandparents in Brooklyn.  He’s enrolled at an all-boys Catholic high school, St. Basil’s, run by an order of monks (his grandmother hopes he will go into the priesthood).  He falls into a crowd of oddballs including Caesar (Malcolm Danare), a nerd who is dismissive of everyone else’s lower intelligence, and Ed Rooney (Kevin Dillon), a bully who is repeating the year at school. Michael is shocked by the severe strictness of the school, especially Brother Constance (Jay Patterson), a teacher who routinely uses corporal punishment and humiliation on the students.

Michael also meets Danni (Mary Stuart Masterson), a girl who has dropped out of public school to run her father’s soda shop across the street from St. Basil’s.  It’s revealed over the course of the movie that her father is suffering from severe mental health issues and unable to run it himself.  Michael and Danni start off awkwardly but begin to date in one of the sweetest teen romances ever depicted on screen.

Three characters I haven’t mentioned in this synopsis add flavor to the story.  First is Michael’s little sister Boo (Jennifer Dundas) who is obsessed with death and burial.  She seems quirky at first but in a really touching scene with Michael she expresses her fear of losing him the way they lost their parents. It’s a small but beautiful scene that shows how children internalize trauma.  The next is Brother Timothy (John Heard), a new teacher who joins the staff at the same time Michael arrives and is a “cool” young monk, who smokes and trades baseball cards with the kids, and acts as an adviser to Michael.  He’s kind of the personification of Vatican II reforms in the movie.  Finally, there’s Donald Sutherland in a terrific performance as Brother Thadeus, the strict but ultimately fair headmaster of St. Basil’s

I watched this movie when it was shown on cable tv in the mid-1980s. Growing up Catholic in a New York City suburb with parents who were teenagers in New York at the time this movie is set it was a no-brainer that I would watch and enjoy this movie.  It was fun to get a look back at the “bad old days” of the Catholic church with Latin masses and corporal punishment.

In retrospect, the 20 years between the time the movie is set and the time it was released doesn’t seem all that long.  In fact, the first English mass was held in the United States in late 1964, so this movie isn’t even set during the Latin mass period.  Still, both New York City and the Catholic church seemed to change quite a bit in those 20 short years.

I hadn’t watched this movie since the 1980s but it was surprisingly fresh in my mind.

I didn’t forget things so much as see them in a different light from an adult perspective.  For example, that kid who masturbates is a funny gag when you’re a kid, but as an adult it seems like a serious problem that should be addressed before he commits a sex offense on someone.  Similarly, Brother Constance was always a mean teacher, but now I see him as a total monster who’s comeuppance should’ve had more severe legal repercussions.  The movie also takes on a different feel in the aftermath of clergy sex abuse revelations that were allowed to persist due to many of the same factors of a corrupt system of power that we see in the film.

If you break it down to its essence, Heaven Help Us is a series of vignettes soaked in Baby Boomer nostalgia.  But it is so much better than that. I think the strong cast of actors really makes all these characters feel real rather than archetypes.  A lot of the younger actors would go on to longer careers so you’re really seeing them come into their own here.  Also, as I noted above with the scene of Michael and Boo, there are a number of great, well-directed and well-written scenes that economically capture moments of great humanity.

Rooney is a bully and sexually aggressive with women and initially an antagonist to Michael, but eventually they become friends.  I think Dillon does a good job of giving Rooney some depth, but overall I think the movie wants to think of his behavior as funny and overlook how harmful it is.

Also, at the end of the movie, there’s an American Graffiti style epilogue where Rooney narrates what happened to all the characters.  It feels out of tune with the rest of the movie and ultimately unnecessary.

Objectively this movie falls short of being a movie classic, but subjectively it will always be one of my favorites.

What is your favorite movie starting with H? What do you guess will be my movie for I? (Hint: it has characters named Bert and Ernie).  Let me know in the comments!