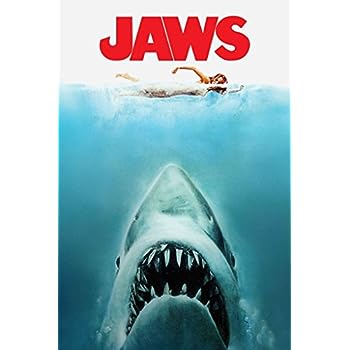 A rogue shark attacks people swimming in the waters off of a New England beach town.  Police Chief Martin Brody (Roy Scheider) wants to close the beaches, but others, including Mayor Larry Vaughn (Murray Hamilton) fear the economic devastation of closing the beaches right before Independence Day.  The shark kills more people, the shark expert Matt Hooper (Richard Dreyfuss) arrives to advise, and shark hunter Quint (Robert Shaw) offers to kill the shark.  Quint, Hooper, and Brody sail out on a boat that’s not large enough to track and kill the shark, bonding on the journey.

This movie was filmed in Martha’s Vineyard, a place that my family vacationed at often during my childhood.  We loved visiting the spots used as locations for the movie including some businesses that still had their “Amity” shop signs on display.  I’m pretty sure that I watched Jaws 2 and Jaws 3-D before I ever watched Jaws in its entirety, but sometime in the late 80s it became one of my favorite films of all time.  The sequels are “meh” because they’re about the shark, but Jaws is a story about people.

I remembered the plot and many details fairly well.

There’s a brilliant scene where Martin Brody’s son imitates all of his gestures and they make faces at one another.  It’s one of those great Spielberg family touches.  Later in the scene, Ellen Brody (Lorrraine Gary) and Hooper have great repartee over wine, which is interesting considering that in the novel they have an affair (I’m so glad Spielberg didn’t include this subplot).

While I remembered that Mayor Vaughn wanted to keep the beaches open, I forgot that Vaugh actually encourages people to go into the water before the July 4th shark attack.

As noted above, this is a movie about people.  The first hour of the movie is less about a shark and more about how people respond to crises.  The town government prioritizing the economic interests over peoples’ lives feels very relevant at the time I watched this movie.  The second part of the movie is three men on a boat all from different backgrounds, all with key abilities, and all with serious flaws.  The camaraderie among Brody, Hooper, and Quint is one of the best aspects of this movie. People may want to avoid or dismiss this as a horror movie but I think they’ll miss that great human storytelling, adventure, and even comedy.

I want to say that the ongoing manhood competition among Quint, Hooper, and Brody is dated, but really men are still that stupid about these things.

I apparently have no other all-time favorite movies starting with J. Let me know your favorite J movies so I can remedy that.  And if you have a guess for my K movie, let me know in the comments. (Hint: it’s about an out-of-towner having a really bad day in New York).