Hooray for more Blogging A to Z Challenge BONUS contents! Because why settle for revisiting one Monty Python movie when you can do two, here is a companion review to my Monty Python and the Holy Grail review.

Eschewing the linear narrative format of their previous two films, Monty Python returns to the sketch comedy style of the Flying Circus, loosely linked by the theme of “the meaning of life.”  The movie begins with a separate short film about a group of elderly accountants overthrowing their young, American bosses and turning their building into a pirate ship to raid financial districts around the world (assuming that the world is round).

The main part of the film is arranged around the different stages of life, from birth to death:

This was the first Monty Python production of any kind that I saw, about the age of 12 with my family on VHS.  Despite being practicing Catholics, we thought “Every Sperm is Sacred” was hilarious and immediately rewound the tape to watch it again.  We followed up by watching all of the Monty Python movies and eventually Monty Python’s Flying Circus, discovering that The Meaning of Life is actually not as funny as some of their earlier work.

I remember the big musical numbers, of course, and the gross-out parts.

I forgot that there is a lot of gratuitous nudity in this movie and casual sexism. The entire scene of topless women chasing a man off a cliff had completely slipped my mind (for good reason).  Also, I forgot about the medieval torture chamber/philosophy conversation sketch.

This movie has some spectacular musical numbers – particularly “Every Sperm is Sacred” and “The Galaxy Song” as well as the school boys singing “Please don’t burn us.”  There’s also some clever satire of consumerism, militarism, and Americans.  I love the Python’s American accents.

I think the best parts of the movie are frontloaded, with Crimson Permanent Assurance being a classic of short film in its own right.  I’m also quite amused by the Birth sketch, “Every Sperm is Sacred” and the Protestant response, and the sex education class.  The plain weirdness of “Find the Fish” also tickles my funny bone every time.

Most everything after “The Middle of the Film” is mildly amusing but not really all too inspired.  The gross-out humor is also (intentionally) over the top.  12-year-old me thought cutting out a liver and Mr. Creosote vomiting were hilarious, but adult me just thinks it’s cruel.  The aforementioned casual sexism – both the topless women chasing a man to death and topless angels in Heaven – have aged very poorly, if it was ever “clever” in the first place. Methinks they were trying to parody gratuitous nudity in 1980s movies but just ended offering gratuitous nudity.

No, but the good bits stand alongside the best work of Python.

This is my entry for “M” in the Blogging A to Z Challenge. Throughout April I will be watching and reviewing a documentary movie from A to Z. Some other “M” documentaries I’ve reviewed are Mad Hot Ballroom, Man on Wire, Man With a Movie Camera, Maradona ’86, March of the Penguins, Mathematically Alive, Miss Sharon Jones!, Mysteries of the Rimet Trophy, The Myth of Garrincha and possibly My Winnipeg.

Murderball is the original name for a team sport played by athletes with quadrapalegia that is officially known as wheelchair rugby.  Players used modified wheelchairs on a basketball court to attempt to carry or pass a ball across the goal line.  Defenders try to stop them by smashing into the ball carrier with their wheelchairs. The documentary focuses on the period of 2002-2004 when the USA men’s national wheelchair rugby team, which had been undefeated in international competitions up to that point, and their rivalry with the upstart Canadian national team.

Three subjects get special focus.  USA star Mark Zupan is a pure jock with an angry streak (there’s no shortage of testosterone in this movie) and one of the best players in the sport.  His ongoing reconciliation with his high school friend who was the driver in the truck crash that caused Zupan’s injury is an ongoing story of the movie.  Joe Soares was a key member of Team USA up through the 1996 Paralympics and then was cut from the team due to age.  With a chip on his shoulder, Soares has become the coach of Team Canada with his mission to defeat the United States.  The movie also focuses on his strained relationship with his preteen son and suffering a heart attack. Finally there is Keith Cavill who has recently suffered injury and learns about the sport while in rehabilitation.

The personal stories of the athletes, coaches, and their family members make up the better part of the movie, focusing on details of how they adapt to life without full use of their limbs (including a section on sexual activity).  The movie is built around three tense games between the USA and Canada – one at the 2002 World Championship, a 2004 Paralympics qualifying game, and concluding with their matchup in the 2004 Paralympics in Athens.  I won’t give away the results, but the games are fascinating to watch.  I actually wish there was more footage of the sport and hope to have the opportunity to see it played in person one day. 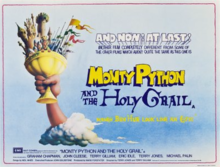 King Arthur (Graham Chapman) and his faithful servant Patsy (Terry Gilliam) recruit knights for the Round Table including Sir Bedevere the Wise (Terry Jones), Sir Lancelot the Brave (John Cleese), Sir Galahad the Pure (Michael Palin), and Sir Robin the Not-Quite-So-Brave-as-Sir-Lancelot (Eric Idle). They decide not to go to Camelot because it’s a silly place, but instead God (Graham Chapman) sends them on a quest to find the Holy Grail.

They have many adventures including being taunted by French soldiers, avoiding a fight with a three-headed knight, facing the peril of a castle full of young women, buying a shrubbery for the Knights Who Say “Ni!,” slaughtering a wedding party, fighting the Rabbit of Caerbannog, and crossing the bridge of death.  On the precipice of realizing the Grail quest, the surviving members of the party are arrested by the police.

In the mid-80s my family discovered Monty Python in reverse order starting with The Meaning of Life.  I was scandalized by The Life of Brian so was not interested in watching more Python, but I walked in while my sister was watching at the Black Knight scene and was sucked into The Holy Grail. It swiftly became my favorite Monty Python movie.  When I was a freshman in high school, our history teacher showed the movie in class to give us the “feel” of the middle ages. We only watched part of the movie, but after school a friend and I snuck in and watched the rest of the movie.  Later, I had my VHS recording of the movie and went through a phase where I watched it every day after school.  It is likely that I’ve watched Monty Python and the Holy Grail more times than any other movie, although Ghostbusters and It’s a Wonderful Life are strong contenders.

I’m pretty close to having this movie memorized.

This is a movie made by highly educated people who did their research on life in the Middle Ages and English folklore.  My history teacher was right about the movie having the “feel” of the Middle Ages even if everything happening is silly. The movie overs a satire of Medieval romance, militarism, religion, political identity, musical theater, and the seriousness of academia.  It also has a knight who keeps fighting when all his limbs are cut off, Knights Who Say “Ni!,” and a killer rabbit. The balance of satire and pure silliness is suburb.

I confess that I think movie fizzles out after they cross the Bridge of Death.  I get what they were doing with the police showing, but it just never was all that funny.

Is the Castle Anthrax sequence sexist?  It’s certainly creepy that the occupants are aged “16 to 19 1/2.”  It’s funny that the version I streamed for this review includes a scene originally cut from the movie where Carol Cleveland breaks the fourth wall to exclaim how much fun she is having.  It’s almost as if it was reinserted to address the problematic elements of this sequence.

A definite classic, and a top-10 all-time comedy.

Beach child.
Get there early, they said. The parking lot fills by 10am, they said.
Wine and 40-year-old trivia questions.
A lot of right turns.
4th of July with the Cape Cod Baseball League.
Ducky.