This is my entry for “N” in the Blogging A to Z Challenge. Throughout April I will be watching and reviewing a documentary movie from A to Z. Some other “N” documentaries I’ve reviewed are Nanook of the North, New York: A Documentary Film, The 1964 World’s Fair, The Night James Brown Saved Boston, No-No: A Dockumentary, and NOVA: Iceman Reborn.

This is a movie I wanted to watch and felt important to watch, but nevertheless didn’t want to see.  Made a decade after the liberation of the Nazi concentration camps in Europe, this is one of the first films to document the horrors of the Holocaust.  The structure of the film mirrors the experience of the people imprisoned in the camps.  It begins with their arrest and transport by train.  Arriving at the camps, the people are stripped of clothing and shaved of hair and humiliated in thousands of ways.  Daily camp life involves forced labor, frequent humiliation, and hunger due to meager rations. Then there is mass murder which this movie is unflinching in depicting.

The filmmakers intercut contemporary film of the abandoned concentration camps in color with black and white film and photographs taken during their time of use.  Jean Cayrol, a poet who survived the concentration camps, wrote the narration which is delivered by actor Michel Bouquet. The movie asks us to remember the full horror of the Holocaust and recognize that it can happen again. 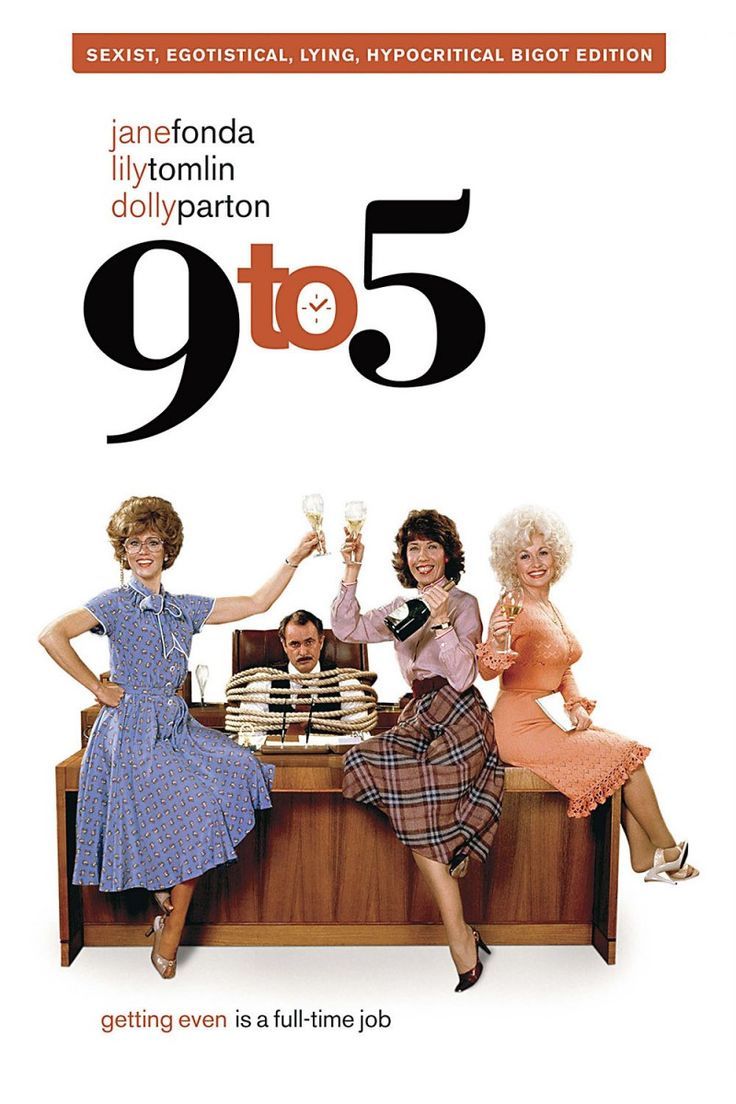 Judy Bernly (Jane Fonda) arrives for her first day of work at the office of the Consolidated Companies in Los Angeles.  Violet Newstead (Lily Tomlin), a twelve-year veteran of the company, shows her the ropes.  Their boss Franklin Hart, Jr. (Dabney Coleman) sexually harasses the women who works for him and takes credit for Violet’s ideas.  The women who work in the office don’t trust Hart’s personal secretary Doralee Rhodes (Dolly Parton) because Hart has falsely stated he’s having an affair with Doralee.

After a particularly bad day, Judy, Violet, and Doralee leave work early and meet at a bar where they bond over their shared indignities of working for Hart.  Later, at one of their homes they smoke a joint and fantasize about taking revenge on Hart.  In the ensuing days, all of their fantasies come true as Violet accidentally puts rat poison in Hart’s coffee.  In a comedy of errors, she believes that he has died (he never drank the coffee) and she steals a corpse from the hospital (it’s not Hart’s). Doralee is forced to tie up Hart and Judy fires a gun at him, just like in their fantasies.

The three women eventually keep Hart hostage in his home while his wife is away on a cruise.  They hope to find evidence of his embezzlement to use against him for the various crimes they’ve committed against him.  In the meantime, they take over running the office, using Hart’s authority to institute flex hours, a daycare center, and equal pay for men and women.  Hart escapes and is able to cover up his embezzlement, but as he tries to expose Judy, Violet, and Dorallee, company chairman Russell Tinsworthy (Sterling Hayden) arrives and compliments Hart for the productivity improvements and gives him a promotion to the Brazil division.

This was one of the movies that was frequently played on cable television in the mid-1980s.

I remembered the fantasy sequences the best, the bondage gear that Dabney Coleman has to wear while he’s held captive, and the fact that all the changes the three women make actually improve the company.

I forgot that the Consolidated employees initially dislike Doralee.  A lot of the details about the workplace, such as Violet having much more experience than men promoted ahead of her, passed over me in my younger years.

Women have always had to work for a living, but in 1980 when this movie was made, there was a big trend for middle-class women entering into white collar jobs.  This movie captures that era perfectly.  And yet many of the issues that the women at Consolidated face – unequal pay, being passed over for promotions, work/life balance issues, and sexual harassment from male superiors – all remain sadly relevant in 2020.  This movie also features performances from three extremely talented women of completely different backgrounds as well as Dabney Coleman playing the man we love to hate.

It’s rather depressing that a 40-year-old movie about women’s inequality seems totally relevant.

Yes, a great comedy, and a great social message movie.

What is your favorite movie starting with N? What is your guess for my O movie (Hint: it stars two all-time great actors who had never me before filming)? Let me know in the comments!