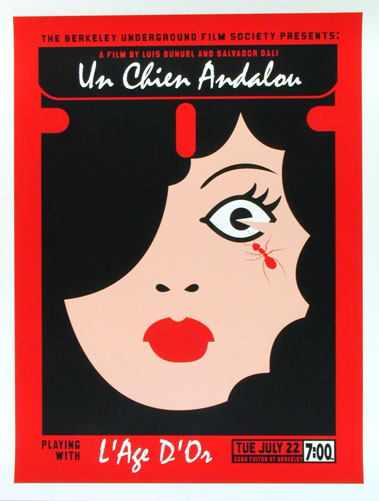 First things first, by all the rules of alphabetization this movie should be filed under “C” not “U.”  But there’s not much that makes sense about this movie so it may as well be here.  For example, writing a “synopsis” of this movie would require it having a standard plot.  Instead, Luis Buñuel and Salvador Dalí populate the film with surrealistic visions and nightmare imagery.

The movie is famed for scenes of a man sharpening a razor and then slicing a woman’s eyeball. Another man pulls two grand pianos with dead donkeys and two surprised looking priests.  There are no real defined characters or places, and much of what we see is horrifying.  Buñuel and Dali plumb the depths of the subconscious as well as giving a goose to the film industry of the possibilities of what film could do.

This movie was my “white whale” for some time.  I read about it in a book for my high school film studies book and it struck me as something so fantastically weird for the 1920s.  Not too long afterwards Pixies released the song “Debaser” which is inspired by Un Chien Andalou.  It wasn’t until the early 2000s when I finally saw the movie at the Harvard Film Archive.  I remember trying to figure out the plot and symbolism for the first five or ten minutes before cottoning on that I was missing the point.

The eyeball slicing, the piano/donkeys/priests, and the man sort of dressed like a nun riding a bicycle around Paris.

The ants, the severed hand, the woman in the street, the sexual assault, the nudity, and the beach.

It changed the way films are made and is the ancestor of much independent and arthouse cinema.

A lot of the ensuing independent and arthouse cinema is made by people who are quite full of themselves.

One More All-Time Favorite Movie Starting With U:

What is your favorite movie starting with U? Any guesses for my V movie (hint: one of its biggest stars is a famous West coast city)?  Let me know in the comments.

If you’re looking for a place that’s extremely LGBTQIA+ AND also very Portuguese but still in the United States, have I got a place for you!
Kay, the Selkie.
It wasn’t really beach weather, but whatever…
I’m a grateful Dad.
Hey now, you’re an All-Star…
Last night’s post-storm clouds at sunset.