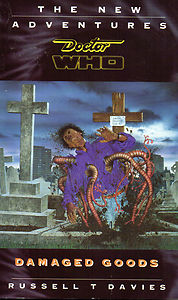 Many of the Doctor Who novels published in the 1990s were written by authors who either wrote for the original tv series or would go on to write for the revived series.  This novel is significant in that it’s author Russell T. Davies would go on to be the showrunner who brought Doctor Who back to our tv screens in 2005.  In common with the later tv series, this story is set on a council estate with a family named Tyler.

Much like in Andrew Carmel’s Warlock, a narcotic drug turns out to be an alien force.  In this case, cocaine contains an ancient Gallifreyan weapon called the N-form.  The weapon draws power from a pair of twins separated at birth who are connected by a vampiric waveform.  The whole plot is rather complicated, but it’s setting in the depression and poverty of Thatcher’s Britain is a well-formed world for the Doctor, Chris, and Roz to unlock a mystery and a human tragedy.

Other Doctor Who Virgin New Adventures: