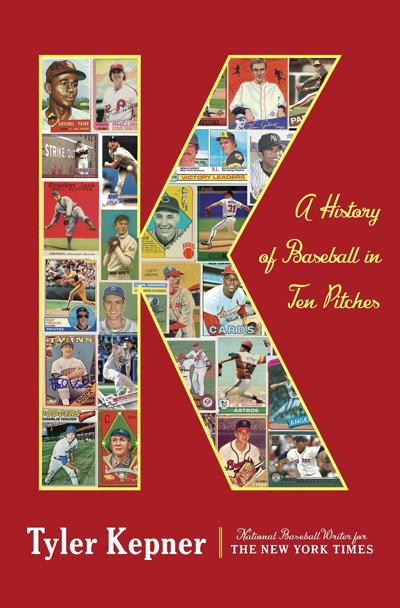 Tyler Kepner explores ten different pitches in baseball, describing how they’re thrown, how they move, and the history of how they originated and developed.  The ten pitches include standard pitches like the fastball, curveball, and slider.

But Kepner also explores pitches that only an elite cadre of pitchers can master (the knuckleball) and a pitch that only one pitcher can really handle (Mariano Rivera and the cutter).  He also explores pitches that had peaks of popularity in the past but are all but absent in the present-day game (the screwball and the splitter).  Kepner even devotes a chapter to spitballs, scuffballs, and other modifications to the ball that affect pitches and the gamesmenship of pitchers known to use them.

The book is written in an oral history style, relying on Kepner’s interviews with current and retired pitchers and coaches as well as quotes from earlier works that covered now deceased pitchers.  The book is a creative way to look at the history of baseball from the perspective of one of its most important facets.

Every pitch is a decision. That is the beauty and the burden of the pitcher. Think there’s downtime in baseball? Tell it to the man on the mound, all alone on that dirt bull’s-eye. The catcher thinks along with him, back behind the plate, but the pitcher rules the game. Nothing happens until he answers these questions: Which pitch should I throw, where should I throw it, and why? It is an awesome responsibility.

I’ve found that most people in baseball tend to be…pretty nice. And of all the subsets of folks in the game, knuckleball pitchers might be the nicest. They are also part of the smallest group, which helps explain it. Almost all knuckleballers were rejected by the game before they could last very long. They earned their living by grabbing the wing of a butterfly and then, somehow, steering it close enough to the strike zone, again and again, to baffle the best hitters in the world.

In the 1930s, the prime of the great Giant lefty Carl Hubbell, “screwball” came to describe a specific genre of Hollywood comedies: battle of the sexes, often with a woman’s madcap antics upending a stuffy man’s world. In his book about Depression-era films, Andrew Bergman wrote that “screwball comedy,” like Hubbell’s famous pitch, was “unconventional, went in different directions and behaved in unexpected ways.”

“Have I ever told you about my agreement with the ball?” Quisenberry asked Angell, who said no. “Well, our deal is that I’m not going to throw you very hard as long as you promise to move around when you get near the plate, because I want you back. So if you do your part, we’ll get to play some more.”

After two chaotic decades or so, the spitball was banned for 1920, the same year the country went dry under Prohibition. The rule simply turned the mound into a speakeasy, with many pitchers going undercover to get the same slippery edge as their predecessors.