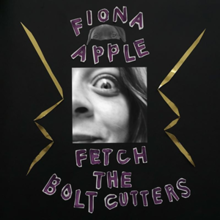 I remember Fiona Apple as the tiny woman with the big, bold voice who had a hit with the song “Criminal” (and its unsettling video) back in the 1990s. I’ve heard whispers that Apple continued to have a great career, and I should’ve listened to them since this new album is absolutely brilliant.  In a way, it’s surprising that Apple has returned to widespread acclaim with this album because it’s very experimental with a heavy emphasis on percussion, only holding onto vestiges of pop music around the edges. Apple sings repetitive lyrics in a variety of chants, using her voice like Yoko Ono to become another percussion instrument.  As the title implies, this album is about release, and there’s anger there, but there’s also catharsis and humor.  It has to be heard to be believed.