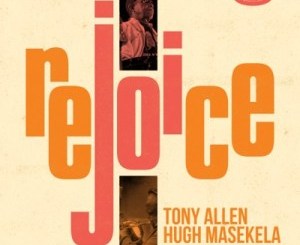 Tony Allen was a drummer from Nigeria who was key in defining the genre of Afrobeat when working with Fela Kuti’s Africa ’70 band.  In 2010, he collaborated with the equally legendary South African trumpeter Hugh Masekela on the sessions that would lead to this album.  Masekela died in 2018. Allen completed the sessions with some of London’s top jazz artists.

Allen died on April 30, just a little over a month after this album’s release, so it stands as a memorial to him as well.  Nevertheless, it is a joyous recording as the title proclaims.  I don’t have the language and experience to adequately describe Afrobeat and jazz, but I like what I hear.  Most of the album is instrumental, with exceptions like “Never (Lagos Never Gonna Be the Same),” a tribute to Fela Kuti.  In the music you can hear the freedom and friendship of two great artists pushing one another to greater heights.  It’s also a very crisp recording where each instrument resonates richly and deeply.

This is a terrific album and makes me want to dive into the back catalog of both artists.

I’d missed having daily encounters with business school rabbits.
Today on a very special episode of Blossom.
Monday: Cloudy, with splashes of color.
Infield hit, RBI, stolen base, and run scored!
Get a hit ... steal a base.
Sunshiny day.