This week I’m posting less of a music review, and more of a suggestion for a couple of recordings I found clever, enjoyable, and even educational.  Each is a compilation of works by various artists that draw inspiration from a flying animal.  In one case, bats, and in the other, birds: 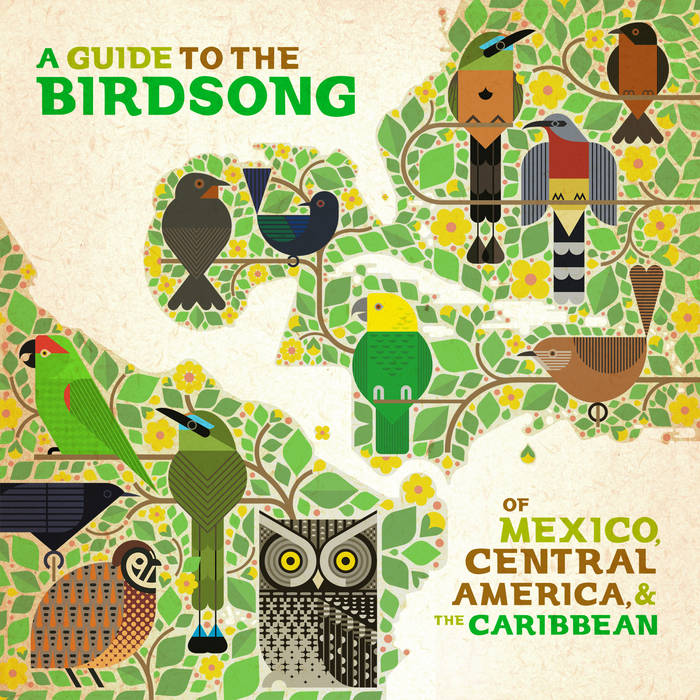 An album of music inspired by the song of endangered birds with 100% of the profits going towards organisations working to protect them.

“A Guide to the Birdsong of Mexico, Central America & the Caribbean” is the second Volume in the series following on from “A Guide to the Birdsong of South America”, originally released on Robin’s label Rhythm and Roots. Volume I raised nearly 15,000 USD for two birding organisations and featured artists like Nicola Cruz, Dengue Dengue Dengue and Chancha Via Circuito.

For this second edition we have shifted focus north of the equator and to the vulnerability of bird species like the Momoto Carenado (Nicaragua), Ferminia (Cuba) and the Jamaican Blackbird (Jamaica), birds who have dwindled in numbers as a result of the environmental repercussions of climate change, deforestation and trapping for the pet trade.

For the album we chose 10 endangered or threatened bird species and challenged 10 of our favourite producers or musicians from the region. Working with the Xeno Canto birdsong community and the Macaulay Library, we sourced a recording of each bird’s song. Each artist was then asked to create an original piece of music inspired by the bird and its song.

In line with out vision at Shika Shika the curation of artists is specifically geared towards those bridging connections between traditional music and modernity, or between organic and electronic sounds. There are contributions from artists in eight different countries, ranging from Jamaica’s organic dancehall trio Equiknoxx, to Dj Jigüe, one of the leaders of Cuba’s burgeoning electronic scene. Belize’s critically renowned Garifuna Collective have been bringing the unique Garifuna culture and language to a global audience for many years, while Tamara Montenegro has been one of the leaders of Nicaragua’s electronic music scene for the past decade.

The project would not have been possible without the support of an incredible Kickstarter community, helping us raise £12,599 in August 2019.

Once the costs of production have been covered, all of the proceeds from this album will be donated to Birds Caribbean, La Asociación Ornitológica de Costa Rica and Fundacion TXORI in Mexico. All profits from the sales of the record, music streaming, poster and t-shirt will be shared between these organisations who focus on engaging local communities to help improve and grow the bird tourism sector, create awareness of vulnerable birds with young people and crucially, provide rescue, rehabilitation and breeding programmes.

Afropop Worldwide :: Africa and the Blues

In this podcast, we learn about how African music is more than just “the roots” and the ties between Africa and American blues traditions.

Boston is the setting for many movies, and the crime movie – also known as the Three Decker Movie or Boston No-r – is one of the most common genres.  Here’s a discussion of some of the best.

The history of how an archetype of the entitled, middle-class white women became known as The Karen.

The final episode of the series on “Who Killed Truth” travels from time capsules to Disneyland to Mark Zuckerberg’s dorm room to find answers.

A breakdown of the remarkable sound design that goes into the stage production of Hamilton: An American Musical.

What Next :: The First Federal Execution in 17 Years

The United States takes another step into a neo-fascist state by resuming capital punishment at the federal level.

While we may be focused on how the United States totally bungled the response to the COVID-19 pandemic, we can learn from Sweden of a complete different way to mess things up.