Author: Colin Tudge
Title: The Tree: a natural history of what trees are, how they live, and why they matter
Publication Info: New York : Crown Publishers, c2006. 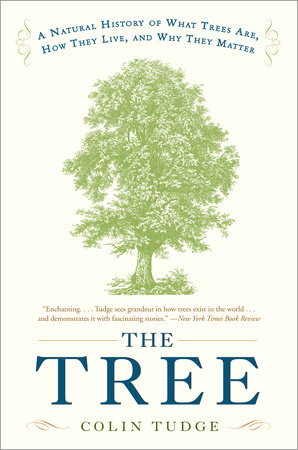 I like learning about trees but I have difficulty retaining any of the knowledge I learn about trees.  I expect that will be the case after this detailed and fascinating study of trees.  The bulk of this book is an encyclopedic breakdown of trees around the world by family, genus, and species. It’s full of fascinating  tidbits.  My favorite section of the book, “The Life of Trees,” is full of interesting stories of how trees function including a symbiotic relationship among fig trees, wasps, and nematodes.  The book can be dry at times, but has enough interesting facts and anecdotes to keep it interesting for a dilettante.

“Metabolism—the basic business of staying alive—is half of what living things do. The other half is reproduction. It is not vital to reproduce in order to stay alive. Indeed, reproduction involves sacrifice; reproduction, as we will see later in this book, is often the last fling: many a tree dies after one bout of it. But it is essential nonetheless. At least, all creatures that do not reproduce die out. However successfully an organism may metabolize, sooner or later time and chance will finish it off. Everything dies. Only those that reproduce endure—or, at least, their offspring do. All individuals are part of lineages, offspring after offspring after offspring.”

“There can be enormous variation among the different individuals of any one species, too, which again is partly genetic. Grain and figure may vary, just like human fingerprints. There may be no specific benefit from such variation. But if there is no great natural selective pressure not to vary, then variations will creep in. Genomes are not commandments, which say exactly what to do come what may. Genes present options. They operate in dialogue with the environment. So the same tree, grown under different circumstances, could grow in very different ways; and the effects of the different circumstances are reflected in the timber.”

“On the whole conifers are excellent pioneers, invading soil that has been variously devastated and has not yet built up fertility. But in good or adequate soils and in reliable climates, where growing should be easy, conifers tend to be ousted by angiosperms.”

“First, if many different species are crammed into any one place, the population of each species is bound to be small. But when populations are small, they start to lose genetic variation as the generations pass. Each parent in each generation passes on only half of his or her genes to each offspring. If the total number of offspring produced is low (as it will be if the population of parents is small), it becomes very possible that some of the parents’ genes will not be passed on at all. Thus, as the generations pass, small populations tend to become more and more genetically uniform, as the rarer types of genes within the population fail to get passed on. This loss is called ‘genetic drift.'”

“Present-day leaders—politicians and captains of industry—are wont to suggest that any radical initiative that takes account of the realities of soil, water, and climate is “unrealistic,” commonly because such initiatives may inhibit the plans of bullish industries and their governments, and hence inhibit “growth.” But the word “realistic” has been corrupted. It ought to apply to the realities that are inescapable—of physics, of biology—made manifest in the declining earth, and the creatures that live on it. It should apply to the realities of people’s lives—whether they have enough to eat, and water, and shelter; whether they have control over their own lives, and worthwhile jobs, and can live in dignity. The “reality” of which our current leaders speak is the reality of cash. But cash is not the reality. Cash is the abstraction.”

“Yet since the start of the twentieth century, the architects’ favorite materials—especially for the most expensive and prestigious buildings—have been concrete and steel, with liberal quantities of bricks that have not been dried in the sun but fired in high-temperature, energy-guzzling kilns. Typically, too, they have been built in open spaces, apparently to show them off, or because trees have been considered inconvenient. So modern buildings are generally exposed to winds and merciless sun. They are made habitable only by constant infusions of energy to heat them and cool them down again. Twentieth-century architecture, in short, has for the most part been a prolonged exercise in profligacy.”

“Many modern architects worldwide are rising to the challenge, creating timber buildings as free in form as any sculpture (with modern techniques, wood can be molded this way and that) yet wonderfully comfortable. They are naturally warm in winter and cool in summer. Thus they contrast absolutely with the concrete and glass creations of the twentieth century which, without constant input of fossil fuel, are colder inside than out in winter, and hotter than the great outdoors in summer—the reverse of what a shelter should be. Truly prestigious buildings of timber should attract major prizes. How wonderful it would be if, say, the Sydney Opera House or the new Guggenheim Museum in Bilbao, in northern Spain, or any of the exciting commercial buildings of Chicago or San Francisco or Boston were made primarily of timber—renewable timber, that is: grown specifically for the task or sustainably harvested. Of course, the timber should not be cheap: we must, while we are about it, put an end to the centuries-old exploitation of wild places and human labor.”

“I am floating these ideas partly through whimsy but mainly to emphasize that although food from trees at present plays only a small part in human affairs (at least if you judge from global statistics), this is largely a historical and economic accident. Grains clearly do have advantages, but they have become as dominant as they have largely through their own momentum. In particular, once the plow was developed (at least five thousand years ago) arable farming became the norm, and everything else became secondary. But if trees had only been taken more seriously, they could have become an enormous food resource—and might be now, if only the coin of history had flipped differently. Indeed, trees have many advantages over grains—they keep the soil in place, they help keep the climate equable—and we should be growing as many as possible. So it is important to change our mind-set, to move away from the idée fixe that says that grains must be central and everything else is marginal.”

Sinuous.
It’s that time of the year again.
Cool kids on the train.
Duke Ellington Memorial by Robert Graham
Three Dancing Maidens by Walter Schott
Where the lines split.