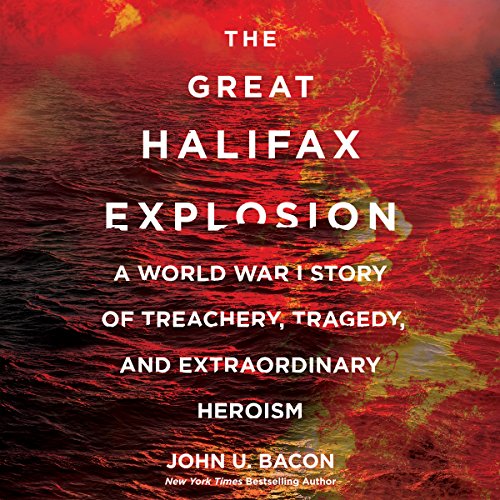 As a Bostonian, we hear about the Great Halifax Explosion every year when the Province of Nova Scotia delivers a giant Christmas tree to Boston Common.  The annual gift symbolizes the gratitude they have for the people of Massachusetts being among the first to respond with relief after the devastating explosion of December 5, 1917.  Bacon’s work is a comprehensive history of Halifax during the first World War, the explosion, and its aftermath.

Bacon does a great job of finding the stories of the people who lived in the Richmond neighborhood of Halifax that was flattened by the blast.  Many of them had come to work in the port’s bustling economy, and some served in the military in Europe. Bacon also breaks down the many errors that lead to French munitions ship SS Mont Blanc colliding with Norwegian charter ship SS Imo, many of them exacerbated by wartime conditions. For example, in peacetime a ship carrying explosives flew a red flag as a warning but this was discontinued as it made ships a target for German u-boats.

Bacon also tells stories of the day of the explosion for dozens of Haligonians.  Some of them contain graphic detail such as the man who survived by landing on something soft only to discover it was a pile of human corpses.  But Bacon chiefly recognizes the heroism and self-sacrifice of many individuals and groups who helped in relief efforts and performed small acts of kindness.  This includes the great support that came from the United States and Bacon marks this response as changing the relationship between the two countries from one of hostility to one of amity.

The explosion remains to this day the largest human-made accidental blast in history.