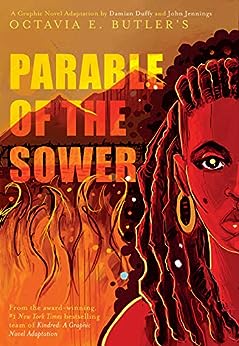 Set in the near future (Butler published the book in the 1990s, but it’s set in the 2020s), Parable of the Sower is a dystopian science fiction novel about the societal collapse caused by climate change, peak oil, and corporate greed. Things are in a bad state already when the novel begins but conditions gradually deteriorate for the characters in the story much like they do for the mythical boiling frog.  Butler also makes it clear that the dystopian state affects some people far earlier, much like they do in our real world, with the homeless and addicted gathered in the edges of the community.

The narrative begins in a walled community in Southern California.  The novel is written as the journal of Lauren Oya Olamina, a teenage girl as the novel begins and the daughter of a minister.  Lauren has a condition called empathy which causes her to feel the pleasure and pain of people near to her, a condition that can be crippling.  She also develops a belief system called Earthseed based on the concept that God is change, and thinks that Earthseed could be a means to saving humanity.

As Lauren grows into young adulthood, she faces tragedies in both her family and greater community.  But she also shows great resilience and leadership as she pulls together a group of allies (or as she would call them, the first Earthseed congregation).  The novel is a grim depiction of a world that doesn’t seem as far removed from our own reality of the 2020s as I would like.  But it is also a novel that offers a lot of humanity and hope.

“No. No, Donner’s just a kind of human banister.” “A what?” “I mean he’s like … like a symbol of the past for us to hold on to as we’re pushed into the future. He’s nothing. No substance. But having him there, the latest in a two-and-a-half-century-long line of American Presidents make people feel that the country, the culture that they grew up with is still here—that we’ll get through these bad times and back to normal.”

“That’s all anybody can do right now. Live. Hold out. Survive. I don’t know whether good times are coming back again. But I know that won’t matter if we don’t survive these times.”

Freedom is dangerous but it’s precious, too. You can’t just throw it away or let it slip away. You can’t sell it for bread and pottage.

One thought on “Book Review: Parable of the Sower by Octavia E. Butler”