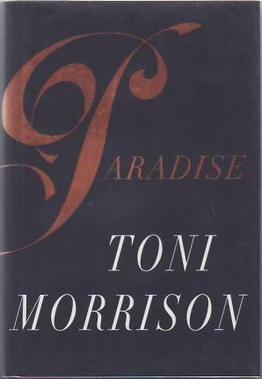 When Paradise was released in 1997, it was the first new Toni Morrison novel since I had learned about her and started reading all of her books.  I got it early on and struggled with it and had to return it to the library after only reading a small part.  I checked it out again but enough time had passed that I had to start over again and I ended up still not being able to finish it.  To my shame, I’ve finally read all of Paradise.  It’s still a book I struggle with, featuring a lot of characters and overlapping plots.

The story takes place in Ruby, and all-Black town in Oklahoma where the prominent men of town take up arms against the women in an abandoned convent on the outskirts of town.  The men treat the convent as if it were a brothel or a coven corrupting the morals in town.  In fact, it is a safe place for women who are escaping abuse, exclusion, and personal tragedies, mainly brought on by the patriarchy of the town and discrimination against light-skin Black people The narrative interweaves the personal stories of women who lived and died at the convent with the history of the town.

As I’ve noted, I found this to be a complex book.  It is also violent and disturbing which makes it hard for me to read.  It’s nonetheless a poetic work with Morrison’s typical honesty and compassion toward her characters.  But it is not going to be a favorite of mine among her novels.

Set in the near future in a dystopian United States, Kazuo Ishiguro’s latest novel is a science fiction story narrated by an android named Klara who is purchased as an Artificial Friend (AF) for a teenage girl named Josie.  In this society some children are “lifted” (genetically-engineered for intelligence and academic advancement) and others are not.  Josie is lifted while her closest neighbor Rick is not, for which he suffers discrimination.

The parallels to our contemporary education system are clear. And while Ishiguro probably wrote this before the pandemic, the novel also depicts the children as socially isolated and learning remotely through screens. Since Klara is solar-powered she begins to view the sun as a deity.  Thus the novel metaphorically explores the origins of ritual and religion as Klara begins to petition the sun for add.  There is also an environmental message in the description of the pollution that obscures the sun.

Klara is intelligent and observant but naive of the human society she enters into.  I’m reminded of the character Charlie in Flowers for Algernon in that Klara narrates details where the reader is more aware of the significance of what she is observing.  I also see parallels to Shel Silverstein’s The Giving Tree since Klara gives so much of herself to support her child.  The novel reminds me of the style of several young adult science fiction novels I’ve read in recent years.  This is a compliment because I think contemporary YA fiction is top notch and it’s interesting for a veteran author like Ishiguro to experiment with different styles.