While Universal Studios Florida is designed to resemble a Hollywood film studio and backlot, Islands of Adventure is a more typical theme park design.  It has several themed areas – or “islands” – arranged around a central lagoon.  Overall I found Islands of Adventure to be more aesthetically pleasing and better landscaped of the two parks.  It also has more roller coasters and all the water rides, compared with USF which is home to mostly dark rides.

We didn’t do much in Port of Entry other than pass through, but the area has a number of shops, dining establishments, and bars with an old Mediterranean/Middle Eastern theme.  It’s an attractive area even if we didn’t spend time there.

Marvel is owned by Disney but they continue to honor a licensing agreement with Universal for a Marvel-land.  At least until the Disney lawyers figure a way out of the agreement.  Since Marvel Comics have lots of reboots and multiverses, I think it’s actually appropriate to have attractions themed to comics and animated tv shows at Universal while Disney Parks have attractions themed to the Marvel Cinematic Universe.

Toon Lagoon is themed around old comic strips and some cartoons, seemingly whatever Universal could get a good licensing deal on.  I don’t know if any kids still read the “funny pages” these days but I doubt they’re reading Gasoline Alley, Broom Hilda, or Cathy.  Most of the land is shops and dining establishments themed around old comic strips, but the Lagoon is also home to two of the park’s water rides.

This area is marked on the map as its own island but it blends in pretty seamlessly with Jurassic Park.  Anyhow,  it has just one attraction.

“You did it. You crazy son of a bitch, you did it!” Life imitates art as we get to step into a real-life Jurassic Park theme park.

The wizarding village of Hogsmeade is meticulously recreated (complete with snow on the roofs that doesn’t melt in the Florida sunshine).  We entered Hogsmeade via the Hogswarts Express from Diagon Alley in Universal Studios Florida (only available to guests with a Park-to-Park ticket) an through Jurassic Park.  Like Diagon Alley, there are a number of opportunities for anyone with a special wand to cast spells. 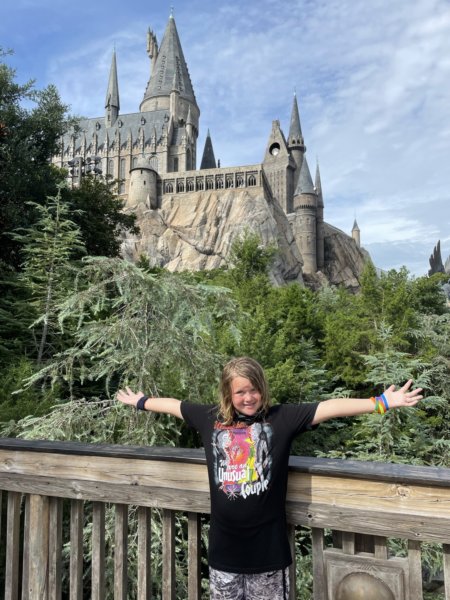 This island is the rump of a larger area once themed to myths and legends that got taken over by Hogsmeade and when we were there it had only one operating attraction, which is more of a slight diversion.

This children’s island is cleverly and colorfully designed after the artwork of Theodore Geisel.  Unfortunately for a kid’s area, it seemed to have the least shade of anywhere in IOA and got very hot.  They need to plant some more truffula trees, stat!

Universal Orlando takes the “exit through the gift shop” ethos to a new level with CityWalk.  In order to enter or leave USF or IOA, you have to walk through this shopping center with many restaurants, bars, and entertainment venues.

We stayed at this Prime Value resort which seemed to offer quite a lot for a good price.  It is themed to vacation hotels and motels from the 1950s and 1960s and full of delightful mid-century modern details.