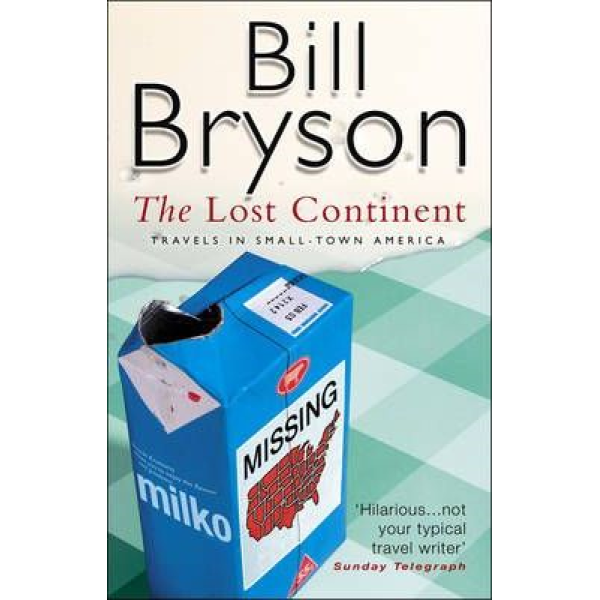 Revisiting an old favorite of mine leads to wonder what I once saw in this book.  The Lost Continent is the first of the many travel books that Bryson wrote and the first one that I read way back in 1993.  I’ve included it on my Favorite Books of All Time lists but will have to reconsider that.  Bryson’s schtick is that he’s often cranky but in this book he’s just downright nasty and describes everyone he encounters as dumb.

Bryson (who may be a distant relation since I have Bryson’s in my family tree) grew up in Iowa, but as a young adult emigrated to England.  The premise of this book is his return to the United States and driving around the country to recreate the vacation travels of his childhood while looking for the amalgam of the American small town.  He finds that most towns have been eclipsed by strip malls and highways.  And he makes some good observations about why it is that some places can be made beautiful – Great Smoky Mountains National Park and Colonial Williamsburg – while the ordinary places are the drab and ugly right up to their edge.

I’ll have to review Bryson’s later books but I feel that he becomes less of a nasty misanthrope and more of a cuddly curmudgeon.  More importantly, he also begins to research the history of places he visits, interview local experts, and incorporate that into his travelogue.  At any rate, the last time I read this book was 2001, when I wrote a more positive review, so I will include that so you can see how my feelings have changed over time:

One of Bryson’s earliest travel books and maybe one of his best since at this point he’s writing from the perspective of an average person driving around America as opposed to the famous travel writer he’d later become. Bryson’s search for the perfect American small town is also very pointed in its satire and criticism. The view of an American expatriate has a special appeal to it.