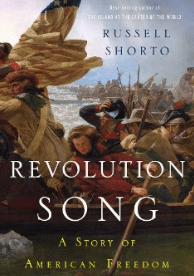 This history of the American Revolution is in fact the parallel biographies of six individuals whose lives came in contact with the war and the underlying ideologies of American independence.  I really like this approach to writing history because while it is unwieldy to attempt a comprehensive history of the American Revolution, by focusing on six individuals you get a better sense of how the war affected different kinds of people.  And as Short tells their entire life stories we get a lot of detail beyond just the 8 years of the war of their lives before and after the conflict.  Finally, we also get to see how these six historical figures dealt with the ideals and challenges of freedom.  I should add, and Shorto makes this explicitly clear, that these six individuals are not representatives of greater populations but simply their own American Revolution stories.

The six subjects of Revolution Song are:

I think the stories of Venture Smith, Cornplanter, and Margaret Moncrieff are the most interesting since they are the type of people that don’t appear in histories that focus on military and political leaders.  Nevertheless, the whole book reads very well and is an interesting addition to Revolutionary War historical studies.