I hadn’t planned it, but most of the documentaries I’m watching for A to Z are serious, social justice issues stuff.  So it’s nice to tune into Disney+ for some lighter fare.

Frank Thomas and Ollie Johnston were animators and directors for Walt Disney Animation from the 1930s to the 1970s.  They became known for their ability to animate characters with vibrant emotions.  The movie focuses on their parallel careers at Disney, takes time to explicate some key character moments in Disney animated features, and talks about their multi-decade bromance.  At the time this movie was made, Frank and Ollie were octogenarians who were not only best friends but nextdoor neighbors.  This is some very sweet and wholesome content! 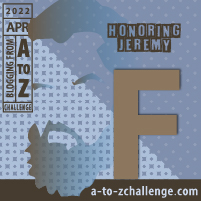 Documentaries starting with the letter F that I have previously reviewed include:

Fannie Lou Hamer, the indefatigable civil rights and voting rights activist from Mississippi, is someone I wanted to know more about.  She’s also someone I think everyone should know about.  This short documentary covers the highlights of her life and career, and is special because all the narration comes from Hamer’s speeches and interviews.  Similarly, the soundtrack includes Hamer singing several freedom songs. It’s hard not to be inspired by Hamer’s persistence despite the obstacles she faced, and her calls for justice and equity sound all too relevant decades after her death. I felt outrage at a scene when Hamer and a small group of activists went to the US Capitol and were met with a massive show of police and were arrested, whereas in our own time there was nowhere near the number of necessary police on hand to meet the actual threat of white supremacist insurrection on January 6, 2021. Fannie Lou Hamer lived a life that was too short and too hard but she left behind a legacy that continues to make a better America today.