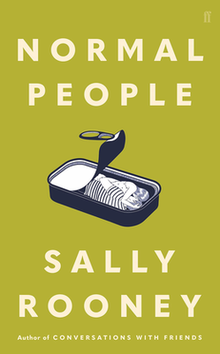 This novel tells the story of two young Irish people who attend the same secondary school in County Sligo, Ireland.  Connell is a popular, working class student while Marianne comes from a wealthy family but her eccentric demeanor makes her unpopular at school.  They get to know one another because Connell’s mother works as a housecleaner at Marianne’s home.  They start a relationship that they keep secret from their classmates.

Both Connell and Marianne end up studying at Trinity College Dublin where Marianne blossoms and becomes popular while the shyer Connell feels like an outsider. Their paths cross frequently over the years, sometimes rekindling their romance, sometimes fighting.  The story is unsettling because it deals with abuse and the dark side of otherwise likable characters.  The title Normal People is ironic since both of them do not feel normal due to their intelligence and disinterest in what the people their age are typical interested in.  Overall it’s a realistic and compelling narrative.