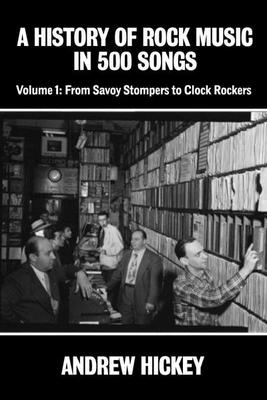 Last fall I discovered the podcast A History of Rock Music in 500 Songs and it has become a must listen for me.  Presented by English author Andrew Hickey, it is a meticulously researched and well-produced in-depth study of popular music.  Each episode focuses not on one song but on the musicians, songwriters, and producers behind that song including samples of their work (not just the title song) and songs that influenced this work. Hickey is very good at debunking the myths of rock music and revealing the much more interesting history of the genre and the people behind it.  This includes acknowledging the innovations of Black musicians whose contributions were often appropriated by the white music industry and later historical revisionism.

Right now the podcast is at episode 153, but this book covers the first 50 podcasts.  This very early history begins in 1938 with the jazz, jump blues, rhythm and blues, Western swing, vocal groups,  and other artists who created the many elements that would become rock & roll.  This volume ends in the mid-50 just after the first generation of rock & roll stars such as Fats Domino, Little Richard, Bo Diddley, Chuck Berry, Bill Haley, Jerry Lee Lewis, and of course, Elvis Presley.  The book, and the podcast, is easy to follow in the chapters/episodes on each song, but it is also an ongoing story that winds through the whole project.  The individuals who manage to pop up again and again and different times and places, and the way they influence and collaborate with one another is one of the fascinating elements of this history.

I can’t recommend the podcast and the book more highly!

One of the great things about popular music before about 1970 is it had a lot of space for people who could do one thing really really well, and who just did their one thing. Artists like Duane Eddy and John Lee Hooker just kept making basically the same record over and over, and it was a great record, so why not?

But people will always want to push against those constraints. And in the 1950s, just like today, there were black people who wanted to make country music. But in the 1950s, unlike today, there was a term for the music those people were making. It was called rock and roll. For about a decade, from roughly 1955 through 1965, “rock and roll” became a term for the music which disregarded those racial boundaries. And since then there has been a slow but sure historical revisionism. The lines of rock and roll expand to let in any white man, but they constrict to push out the women and black men who were already there. But there’s one they haven’t yet been able to push out, because this particular black man playing country music was more or less the embodiment of rock and roll.

This series is about the history of rock music, but one of the things we’re going to learn as the story goes on is that the history of any genre in popular music eventually encompasses them all. And at the end of 1955, in particular, there was no hard and fast distinction between the genres of rock and roll, rhythm and blues, and country music.