It feels natural to refer to the participants in The Up Series as children, but 35 Up is the point where there are more films showing them as adults than as children.  In fact, they are settling into adulthood with children, new homes, settled career paths, and the passing of parents being common themes.  This film brings the series into the 1990s, which as I often joke with my kids, feels like yesterday. And yet, as recent as 1991 feels to me, this is actually the halfway point of The Up Series thus far, with four more films to come.

Charles is still not participating, sending only a photograph, as he now works as a producer for the BBC but does not want to appear in front of the camera.  Symon is also missing, as is Peter, who suffered a lot of blowback for his rather anodyne criticism of Margaret Thatcher in 28 Up. John, who presumably approves of Thatcherism, is back after missing the previous film.  He’s married now and a barrister and mainly appears to promote his charity to support people in Bulgaria.  He does seem like less of a prat.  Andrew, the other boy from a prosperous background, has settled in a less flashy but comfortable life also working in law, and father to two sons.  He even speaks out in favor of more taxes for social services! Suzy is also doing well in her marriage to solicitor Rupert and they now have children, although Suzy remains wary of revealing too much.

Tony is doing well and his wife Debbie is more prominent in the interviews.  I like that we get to see both of them working as taxi drivers in London.  Paul’s wife Susan also has more to say in this film, although she mostly talks about Paul.  You have to feel for Paul because his lack of confidence is so strong after his troubled childhood, but he nevertheless seems to have a strong marriage, loves his children, and skill as a bricklayer (even if he fails to run his own company).  Nick’s wife Jackie appeared prominently in 28 Up, but didn’t like how she appeared and that viewers thought their marriage was doomed so she sits this one out.  Nick, on his own, still remains one of the most observant participants on how the whole experiment affects the people involved and is good at sharing his experience. I continue to be surprised that Jackie, Lynn, and Sue are still being grouped together for their profiles, although their different stories are starting to emerge.

Two of the participants remain unmarried.  Bruce, who seems so kind and thoughtful, has become a teacher in Bangladesh, somehow fulfilling his childhood goal of becoming a missionary in a less colonialist way.  Neil, still struggling with mental health and stability, nevertheless seems to be in a slightly better place having found a place to live in a council estate on the Shetland Islands and engaging with the community by directing pantomime shows. The stories of Bruce and Neil are ones that have the most intrigue of what comes next. 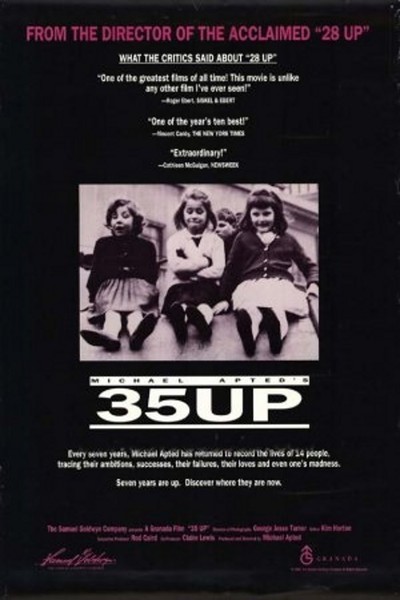