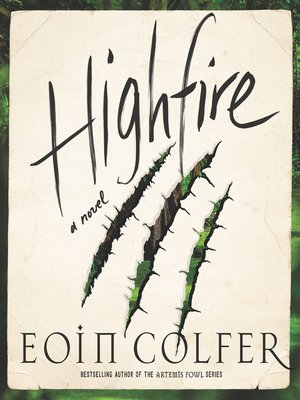 Previously Read by the Same Author:

I received an advanced reading copy of this novel through the Library Thing Early Reviewers program.

Eoin Colfer writes fantasy fiction primarily for the young adult audience, but this book is most decidedly not for children.  Nevertheless, the book is about an ancient dragon Wyvern, Lord Highfire (“Vern” for short) who has retired to the Louisiana bayou where he reclines in his La-Z-Boy wearing a Flashdance t-shirt and drinking vodka while watching Netflix. A series of incidents bring him together with a teenager named Everett “Squib” Moreau, who has a penchant for trouble but is trying to do his best. Squib eventually becomes Vern’s assistant or “familiar” despite the latter’s mistrust of humans.

Squib has the misfortune that the corrupt and sociopathic constable Regence Hooke is insistent on dating Squib’s single mother.  Squib gets into deeper trouble when he witnesses Hooke murdering a rival.  Hooke learns of Vern from following Squib and comes up with a plan to use the dragon to take out a New Orleans crime lord and take control of drug and arms trafficking.

Parts of this book are a delightful blend of fantasy and gritty, everyday life on the Louisiana bayou.  I especially enjoy the growing relationship between Squib and Vern.  Unfortunately, Colfer seems to revel in detailing Hooke’s cruel and psychotic mind.  It gets to the point where Hooke feels like he’s the main protagonist of the story and he’s not someone I want to spend a lot of time with.

I imagine the author read the Aubrey/Maturin series and thought “I’d like to write that same type of book. With dragons.”  Set in the Napoleonic Wars, this is a historic novel for the most part, with the exception that dragons are real and used by the British and French for airborne battles.  It begins when Naval captain Will Laurence captures a dragon egg from a French ship and forms a bond with the young dragon Temeraire after he hatches.  Laurence and Temeraire quickly form a close relationship, but Laurence is forced to resign from the Navy and join the Aerial Corps, which is not only mysterious and dangerous, but has very low social standing.  Laurence learns that life in the Aerial Corps is more relaxed than in other branches of the military, and that women are paired with dragons and afforded equal standing, so the book is also a comedy of manners in many ways.  Plus, there are cool aerial battles.

I’ve learned that this is the first in a series of 9 books, and while I enjoyed this book, I’m not sure I want to commit to the whole series (I couldn’t even get through all of Aubrey/Maturin).  If you’ve read them, let me know if it is worth continuing.

First day of school in-person in 353 days.
I am a simple man with simple tastes. And right now I fantasize about watching a movie in a theatre and then going to a bar to discuss it over a draught beer.
At the end of the rainbow.
Spring things that bring me joy.
Tokens of my affection.
Good morning, Keytar Bear!