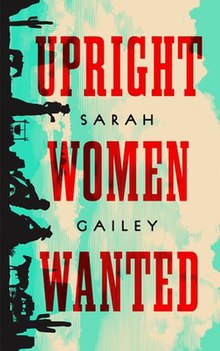 This novella has a western vibe while actually set in a dystopian future in which the United States has crumbled under autocratic rule that discriminates against LGBTQ people (ok, maybe not so far in the future?).  Esther hides in a wagon belonging to The Librarians after the execution of her lover Beatriz.  The Librarians officially travel the southwest distributing “approved” reading material but in fact are gun-slinging lesbian women and enby people with ties to pockets of resistance. It seems like a very short story for all of its ambition, but has some great moments, and can be disarmingly sweet and hopeful. 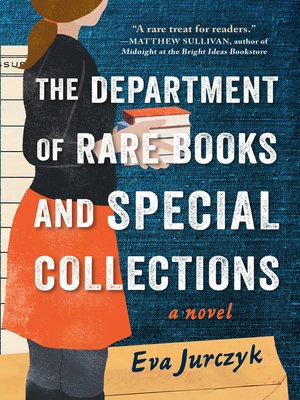 Liesl Weiss is no sooner named the interim director of the Department of Rare Books and Special Collections at a university in Toronto when things start to go wrong.  A rare Plantin Polyglot Bible is supposed to be the library’s latest prize acquisition but it is missing and the only one who had seen it is the previous director who was incapacitated by a stroke.  Liesl comes to the realization that the Plantin was stolen and it could’ve been an inside job.  Was it Miriam, a librarian who suddenly stops showing up for work just before the book went missing?  Or could it be Francis Churchill, a rare books expert who Liesl is rumored to have had a fling with?

In addition to trying to solve the mystery, Liesl has to deal with people questioning her ability to do the job as a woman.  The university president certainly doesn’t want to make the theft made public because it would frighten off donors.  Working in an academic library myself, the absolute most accurate part of the book is the university’s need for reputation management and placating wealthy donors above everything else.  But it’s also a great mystery with a very satisfying conclusion.

I typically don’t include an official publisher’s description in my book reviews, but I can’t find the words to sum up this book any better:

Many years ago, Claire was named Head Librarian of the Unwritten Wing– a neutral space in Hell where all the stories unfinished by their authors reside. Her job consists mainly of repairing and organizing books, but also of keeping an eye on restless stories that risk materializing as characters and escaping the library. When a Hero escapes from his book and goes in search of his author, Claire must track and capture him with the help of former muse and current assistant Brevity and nervous demon courier Leto.But what should have been a simple retrieval goes horrifyingly wrong when the terrifyingly angelic Ramiel attacks them, convinced that they hold the Devil’s Bible. The text of the Devil’s Bible is a powerful weapon in the power struggle between Heaven and Hell, so it falls to the librarians to find a book with the power to reshape the boundaries between Heaven, Hell….and Earth.

Sounds quirky, doesn’t it? The premise also feels like a crossover of Jasper Fforde’s Thursday Next series with Terry Pratchett & Neil Gaiman’s Good Omens.  But the similarities are superficial.  This is a creative and beautifully strange book.  And while the characters are mostly demons, angels, muses, fictional beings and, well, the dead, it is also a very human story.

I’ve learned that this is the first book in a series, and while I won’t be rushing out to read the next book, I will definitely read it at some point.
Recommended books:

Not many movies can truly be said to change you life.  I watched Party Girl in the 1990s and watching protagonist Mary (Parker Posey) decide to become a librarian made me think that I wanted to be a librarian.  A few years later, I was working in a library, and few years after that I’d earned a masters in library and information science.  Today I work as an archivist within a library.  Granted, I’d always loved spending time in libraries so I probably had a predilection for librarianship, but the positive way it’s depicted in this movie really made me think it was a possible career choice.  That and Parker Posey dancing on a table while shelving books is one of the hottest things ever put to film.

Ironically, Mary is not a sympathetic character.  She is selfish, fashion-obsessed and often rude to her friends.  But the sense of directionless one has in one’s 20s is relatable.  There’s a good supporting cast, including Leo (Guillermo Diaz), Mary’s roommate who’s an aspiring DJ; Mustafa (Omar Townsend), a Lebanese immigrant who runs a falafel stand while hoping to become a teacher; and Judy (Sasha von Scherler), Mary’s godmother and a librarian who hires Mary as a clerk in order to pay off her debts.

The movie remains popular in the librarian community with some funny moments with patrons that are memeable.  The finale where all of Mary’s friends convince Judy that Mary’s librarian skills have really helped them is also a big selling point.  The movie also has a banging soundtrack full of dance tracks from New York’s queer club scene of the 1990s.  It remains one of my all-time favorite comedies.

The fifth and possibly final Alcatraz book picks up where the previous one ended with Alcatraz having destroyed all of his family’s talents.  Now he must ally with his mother – an evil librarian – to stop his father, a Free Kingdomer whose desire to give every one on Earth a Smedry Talent which could have disastrous consequences.  Smedry and his team go to the Evil Librarian’s Highbrary – a.k.a The Library of Congress in an alternate universe version of Washington, DC.  Unfortunately, Smedry’s friend and defender, Bastille remains in stasis for the better part of the book.  Smedry and Bastille’s love/hate chemistry when they are together is one of the best part of the series and this book suffers from its absence (although when Bastille finally makes her entrance, it’s spectacular).  The book has the usual clever wordplay – including a chapter of delicious puns – but it feels like Sanderson’s heart is not really in it anymore, and it is the weakest book in the series.  Or it could be Alcatraz, who obstinately states this is the last part of his biography after an uncharacteristically dark ending to the book.  But Alcatraz is an unreliable narrator who has lied to us before, and there are clues that this is all just a big cliffhanger leading to yet another book.

John Green reviews the history of the teddy bear and offers a solid defense of penalty shootouts in soccer games through the story of AFC Wimbledon.

Songs that are unofficial anthems including “This Little Light of Mine,” “Whittier Avenue” by Chicano rock band Thee Midniters, and two songs called  “Fight the Power” by The Isley Brothers and Public Enemy.

How the American criminal justice systems tangles up the poor in Kafkaesque web of debts and punishment.

This American Life :: The Room of Requirement

Stories about libraries and librarians.  I’m particularly touched by the woman is reunited with the children’s librarian who helped her when she was a homeless child.  I’m also a fan of Richard Brautigan and W.P. Kinsella, so I liked that story of the Brautigan Library.

Running tally of Podcast of the Week appearances:

The Alcatraz series continues with the great humor and cleverness of the previous books, including a great running gag on chapter numbering.  The book focuses in on the history and meaning of the Smedry Talents bringing alight some fascinating details.  The story also finds Alcatraz and his friends in the middle of war, with all the loss and sacrifice that entails.  While humorous and never comes to a point that death seems possible, the book does exposit on the frightening reality of children in war.  Finally, Alcatraz makes an unexpected alliance.  Another great book in this series, and I look forward to the next and final volume.

Six years ago I read the first book in the Alcatraz series and really enjoyed it and meant to continue with the series.  Now at last I’ve read the second book in the series and it was worth the wait.  Sanderson’s Alcatraz Smedry is an unreliable narrator who keeps interrupting the story to deliberately make the reader question everything.  It’s gimmicky but in-universe it works since the concept of this world is that evil librarians control reality.  It’s a funny adventure set in the Library of Alexandria, and Sanderson is committed to the idea of the wraith-like curators persistently trying to trick the human visitors into taking a book in exchange for their soul.  It’s a clever and enjoyable read and I should not wait so long to continue the series.

Recommended books: A Series of Unfortunate Events by Lemony Snicket, Artemis Fowl by Eoin Colfer and Gregor the Overlander by Suzanne Collins.
Rating: ***1/2

Jessy Randall, the Curator of Special Collections at Colorado College, and blogger at Library Shenanigans used her librarian skills to track me down and offer me free copies of her books in exchange for an honest review.  While I’ve never quite figured out how to review poetry, I’ll give it my best shot!

This is a collection of humorous poems on various topics from childhood, to work, to parenting, to popular culture. And pantsing.  There’s a heartfelt poem pantsing.  There is also a selection of “poetry comics” – simple drawings and diagrams where a picture says 1000 poetic words.  This is funny stuff.  If you like humor and poetry, this is for you.

Recommended books: Step Aside, Pops by Kate Beaton and Where the Sidewalk Ends: Poems and Drawings by Shel Silverstein
Rating: ****

Jessy Randall, the Curator of Special Collections at Colorado College, and blogger at Library Shenanigans used her librarian skills to track me down and offer me free copies of her books in exchange for an honest review.  While I’ve never quite figured out how to review poetry, I’ll give it my best shot!

In this volume each poem starts with a line from a Mother Goose rhyme, usually “There was an old woman…” and then goes off entirely different direction.  Usually there’s an anachronism putting that old woman in contemporary times with modern sensibilities, with no shortage of feminism.  Sometimes it’s a lot more absurdist or has meta-commentary on nursery rhymes.  But each poem is quirky and funny.  I enjoyed this book

Recommended books: Cow Poetry and Other Notes From the Field by M Frost and The Fourth Bear by Jasper Fforde
Rating: ***1/2