Author: Jason Surrell
Title: Pirates of the Caribbean: From the Magic Kingdom to the Movies
Publication Info: Disney Editions (2005) 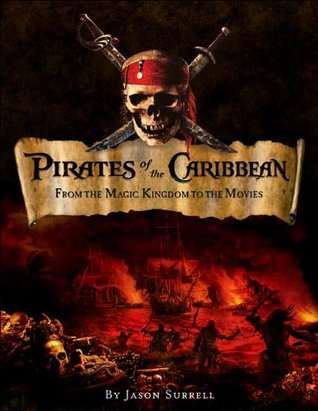 Pirates of the Caribbean is one of my all-time favorite Disney attractions so it was a lot of fun to get a behind the scenes perspective on the history of the ride.  Surrell, who was a Disney imagineer at the time of writing, digs into how the original Pirates came to be at Disneyland in the 1960s (one of the final projects with Walt’s direct involvement although he died a few months before it opened).  Then he explores how the ride was adapted and changed for Florida, Tokyo, and Paris.  The book also does a great runthrough of the ride experience in each location, with quotes from Imagineers who helped design them.  Finally, the book concludes with a surprisingly interesting story behind the making of the first movie adaptation Pirates of the Caribbean: Curse of the Black Pearl. This coffee table sized book is lavishly illustrated with everything from artistic sketches to models to photos of the ride in operation.

I’ve heard of steampunk and cyberpunk, but I guess this movie is sailpunk, since it involves sailing ships traveling through space.  The retelling of Treasure Island in an alien setting has some fun features: Jim Hawkins (Joseph Gordon-Levitt) goes skysurfing, John Silver (Bryan Murray) is a cyborg, the captain is the anthropomorphic cat, Captain Amelia (Emma Thompson), and a shapeshifting creature named Morph (Dane Davis).

But outside some impressive visuals, Treasure Planet doesn’t go far enough in reinventing Robert Louis Stevenson’s story as a space opera (and believe me, I just watched Treasure Island and Muppet Treasure Island, so I’m very familiar with the basic plot points that are repeated in all three interpretations. The movie soundtrack also features songs by John Rzeznik of the Goo Goo Dolls that does nothing but date the movie to the early 2000s.

Treasure Planet isn’t bad, per se, but it had the potential to be so much more if the filmmakers had embraced the weirdness rather than playing it safe.

Since I was watching Muppets Treasure Island and Treasure Planet for movie-watching projects, I decided to complete the trilogy of Disney adaptations of Robert Louis Stevenson’s novel with this Technicolor spectacular.  This was Disney’s first fully live-action film and benefits from moody set design and location filming in England.

12-year-old Bobby Driscoll plays Jim Hawkins as an all-American boy of the 50s and seems to specialize in making sour faces in reaction to other characters, but he does all right in the role. Robert Newton steals the show with his West Country accent and says everything you want to hear from a movie pirate.  Denis O’Dea as Dr. Livesy adds some gravitas to balance the pirate antics.

Overall, it’s a good adventure, and while this move is clearly in the mold of 1950s family entertainment, it nevertheless holds up very well.

Welcome to Muppet Mondays! Over the next several Mondays I will be working my way through the various movies in the Muppets and Jim Henson oeuvre.

Muppet Treasure Island follows the same formula as The Muppet Christmas Carol: Adapt a 19th-century British literary work, cast a veteran English actor in the starring role, have Gonzo (Dave Goelz) and Rizzo (Steve Whitmire) as the audience identification Muppets, and have the rest of the Muppets portray supporting characters and the chorus. I remember seeing this movie in the theater and was a bit underwhelmed, but on rewatch Muppet Treasure Island proves to be the rare movie that ends up being better than I remembered.

Much more so than the often somber A Christmas Carol, a pirate story plays to the Muppets’ anarchic strengths.  Tim Curry brings roguish charm to Long John Silver, and Kevin Bishop is a a good-natured Jim Hawkins with a nice singing voice.  Kermit (Whitmire) is perfect in the role of Captain Smollet. The music numbers are enjoyable, especially the bonkers setpiece “Cabin Fever”. I also love the running gag of rats going on a cruise.

The first – and only other – time I watched this movies was when it was first released in the theaters.  Expectations were low for a movie based on a theme park attraction and produced by Jerry Bruckheimer, of all people.  But early reviews were good, so some friends and I went to see it and it was … fun!  Johnny Depp’s quirky take on Keith Richards as a pirate is of course the most memorable thing about this movie.  But on rewatching, it’s clear the other actors are doing a good job too.  Keira Knightley portrays Elizabeth Swann as a natural leader and Orlando Bloom realizes that playing the straight man doesn’t mean being dull.  I also notice that the many action set pieces are not only entertaining but they all also advanced the plot or character development.  So this movie does everything that a big budget cash-in on a theme park ride produced by Jerry Bruckheimer shouldn’t and remains a classic.

This is an “adult” novel written under Handler’s real name instead of his more famous pseudonym, Lemony Snicket.  Set in contemporary San Francisco, the story details the lives of a dysfunctional family living beyond their means in an Embarcadero condo.  The storylines alternate between Phil Needle, a radio producer looking to exploit the legacy of an African American blues musician, and his 14 y.o. daughter Gwen, who has grown disaffected by the upper middle class life and eventually puts together a crew to steal a boat and run amok on the San Francisco Bay (the “pirates” of the title).  Snicket-like touches are there such as the unreliable and mysterious narrator who begins as a guest at the Needles’ party but then locks themselves in the bathroom to begin telling the story of their hosts.  And the story of Gwen and her youthful companions (plus her grandfather with Alzheimer’s) is far more engaging that Phil’s story. Ultimately, this novel felt a bit drab and I ended up finishing reading it more out of courtesy than interest.

Phil Needle wasn’t a good person, in a what-a-good-person-you-are sort of way, but he was good, somehow, surely. He was merciful. He stepped on wounded bees. He did good, and when he did bad it wasn’t his fault. It was a mistake. He was so sorry, behind the bumper sticker, for whatever and everything it was he had done.

Swashbuckling adventure awaits Annie and Jack as the magic tree house takes them to an island, and they have to help pirates find a treasure.  I love pirates, but this is a weak story in the series, albeit still entertaining.  It also introduces Morgan in a section at the end that feels a bit tacked on.  Apparently this was supposed to be the last book in the series, but I’m glad that they didn’t stop there!

I awaited the release of this book with great anticipation as it contains three elements I can’t resists: pirates, quirky application of social sciences,  and a terrific pun in the title.  Overall it did not disappoint.  Leeson examines the Golden Age of Piracy (roughly 1680-1720) through the lens of economics, seeking economic reason for what pirates did.  Much of pirate behavior is based in reaction to the harsh and unrewarding life of sailors under cruel captains.  Leeson shows how pirates preceded both James Madison and Adam Smith by decades by creating democracies and free market capitalism aboard their floating communities.  It was beneficial to the crews as a whole to elect their captains and to sign pirate codes that would determine fair treatment – and a fair share of the booty.  Pirates also should a fair amount of tolerance for black sailors among their crew making their racism subservient to the economic benefits of a good hand on board no matter what his color.

The “Jolly Roger” and the wild antics of pirates like Blackbeard also have an economic purpose – to force the pirates’ prey to surrender without a fight.  Sea battles would damage the pirates’ prize, their own ship, and perhaps even the pirates so it behooved them to act as threatening and crazy as possible to actually prevent violence.  For many of these reasons, pirate ships were actually popular among the ordinary sailors who were willing recruits into a society that would allow them a voice in how things are done and take home a greater share of wealth than they’d earn in the merchant marine.  The book concludes with a humorous management course as taught by a pirate with a syllabus of articles and books that back up the economics behind the pirate way.

One quibble I have in this book is that Leeson often deviates from economics to slip in Libertarian ideology in tangents that seem odd and out of place.  For example, he takes up several pages to convince the reader that all government is based on the threat of violence as opposed to pirate societies which were freely joined.  He even writes of the benefits of pirate torture in regulating the behavior of commercial ship captains (who had to treat their sailors well lest they too be caught and tortured by pirates) but seems to see only evil in any regulation whatsover by government.  Nevertheless, this is an enjoyable and educational book that brings the dismal science to life through the romance of piracy.  Arrr!

Recommended books: Freakonomics by Steven D. Levitt; Under the Black Flag: The Romance and the Reality of Life Among the Pirates by David Cordingly
Rating: *** 1/2

More ways for ye landlubbers to cel’brate this great day:

And, shiver me timbers ye scallywags can even see Facebook and Google in its proper pirate language!

Don’t forget to get yer pirate name like these fine pirate–librarians, and meself:

My pirate name is:

Get your own pirate name from piratequiz.com.
part of the fidius.org network

The Pirates! In An Adventure with Scientists (2004) by Gideon Defoe is a natural book for me to read.  I like pirates!  I like Charles Darwin!  I like humor!  This slim book brings them all together.

The gist of the story is that a ragtag bunch of pirates known only by their attributes (the Pirate Captain, the pirate with the scarf, the pirate with the accordion) join Charles Darwin in adventure to take on the Bishop of Oxford with his trained ape, the Man-Panzee.  And from their it gets rather absurd.  I enjoy the silly adventures and the even more ridiculous footnotes.  I suspect it very easily can be seen by someone with different tastes as stupid, but to each their own.