Merry Christmas! Today I will be posting my reviews of my binge-watch of holiday movies. Enjoy!

This animated, LEGO-fied Disney + special is a funny take on the Star Wars universe, holidays specials, and the notorious Star Wars Holiday Special of 1977. Set after Rise of Skywalker, Poe is eager to celebrate Life Day with the Wookiees on Kashyyyk, while Rey looks for some wisdom to make her better at training Finn to use the force. Her journey leads her to find an Jedi artifact that opens portals through time so she can travel through time and witness Jedi masters training their apprentices. Things go wrong and soon characters from throughout the Star Wars timeline are mingled together, leading to some great gags such as Kylo Ren meeting his hero Darth Vader and the Emperor, and three different versions of Obi-Wan Kenonbi greeting one another with “Hello there!” It’s a good laugh for Star Wars fans who have a sense of humor.

WARNING: LOTS OF SPOILERS HERE! DON’T READ IF YOU HAVEN’T WATCHED THIS SEASON AND WANT TO BE SURPRISED.

The Mandalorian returns with Din Djarin (Pedro Pascal) on a quest to reunite The Child (a.k.a. Baby Yoda) with the Jedi, assuming he can even find Jedi in the galaxy. Familiar faces from season 1 return to support The Mandalorian on his quest, including Peli Motto (Amy Sedaris), Cara Dune (Gina Carano), Greef Karga (Carl Weathers), and Migs Mayfield (Bill Burr).  But this season is also about tying in The Mandalorian with wider Star Wars lore, featuring the live action debut of the characters Bo-Katan Kryze (Katee Sackhoff) and Ahsoka Tano (Rosario Dawson), as well as the return of Boba Fett (Temuera Morrison), now teamed with Fennec Shand (Ming-Na Wen).  The biggest character reveal, though, is reserved for the final moments of the season finale.

Each episode is still largely self-contained with the Manadalorian typically involved in carrying out a favor for someone in return for information that will help him on the quest.  Tantalizing details of the larger story trickle out but also there are some huge revelations through the season.  For example, we learn that “Baby Yoda” is actually named Grogu, and that he was a youngling who survived the Jedi Purge.

Pedro Pascal continues to provide some wonderful, nuanced acting in the lead role. His character learns a lot about his people and his beliefs this season and makes some dramatic choices out of his love for Grogu. The rest of the cast also remains uniformly brilliant, and I particularly like Bill Burr bringing a bit of morally ambiguous wisdom to his Space Boston character. The Mandalorian is a great mix of action, drama, mystery, and humor and remains the only show my whole family eagerly watches together.

In 1991, I was a freshman in college when news that the Star Wars saga would be continued in books caused a flurry of excitement. In 2020, when an avalanche of new Star Wars content was just announced it may be hard to understand how excited we were to see the continuing adventures of Luke, Leia, Han and company. As the generation who grew up on Star Wars, we were promised a nine movie saga, but after Return of the Jedi there was eight long years of nothing.  And so if the story was going to continue in books, we would read books.

The novel picks up five years after the destruction of the Second Death Star and defeat of the Emperor with the New Republic government now attempting to win the peace.  But there are still parts of the galaxy under Imperial control and they are coalescing under a new leader, Grand Admiral Thrawn.  In many ways, Thrawn is a more compelling villain than Palpatine as he has no sensitivity to the Force and instead uses his intelligence and studies his enemies’ culture to predict they’re behavior.  Even with this book being de-canonized to the Star Wars Legends, the character of Thrawn has reemerged in other media, because he’s just that interesting.

I enjoyed this book on several readings and found it a good adventure, although it is very bookish and probably would’ve never translated to the screen.  On the other hand, my wife and I read this to our Star Wars-obsessed daughter and my wife found it boring, while my daughter lost interest with only a few chapters to go.  So, your results may vary.

The original Star Wars trilogy finishes off with this competent novelization that doesn’t veer off all too much from the movie. The best part of the book is that it does get inside the characters’ minds to give their thoughts during key scenes of the story. The Vader, Palpatine, and Luke dialogue is also expanded. Also, the ghost of Obi-Wan tells Luke that Owen is Obi-Wan’s brother and that Luke & Leia’s mother lived until they were 4 (which works much better than the retcon of the prequels). All in all it’s an engaging retelling of a great story.

The best Star Wars film gets a competent and straightforward novelization. As is the case in all novelizations, there are scenes that didn’t make it into the movie, especially when Luke is training with Yoda. The book does make it feel like more time is passing in both Luke & Yoda’s stories and the Millenium Falcon storyline whereas in the movie it feels as if everything happens in a couple of days. The only startling change is that Yoda is blue instead of green! And Harrison Ford’s famous improvised line “I know” is not in the text. It’s an entertaining read for fans of the movies.

Continuing our way through Star Wars novelizations, my daughter and I read this very first piece of “Expanded Universe” media.  Like other novelizations, the book contains scenes that were deleted or didn’t even make it to filming. Also, Greedo shot first and somehow that was never edited otherwise.  I find it interesting that with the larger mythos of Star Wars being created that Foster hints at story threads that wouldn’t be followed-up or would end up very different once the sequels and prequels were rolled out. He also tends to use analogies to things on Earth more than later Star Wars writers would do. A significant downside is that Foster’s descriptions of Jawa’s use horribly prejudicial terms.

“Remember, Luke, the suffering of one man is the suffering of all. Distances are irrelevant to injustice. If not stopped soon enough, evil eventually reaches out to engulf all men, whether they have opposed it or ignored it.”

Continuing reading Star Wars novelizations with my daughter, we come to one of the best novels drawn from a rather mediocre movie. Stover has a highly literary style and inserts into scenes from the film the thoughts of the characters and has them remembering key moments in flashback.  The book is very character-driven and features frequent changes in point of view.  Villains like Count Dooku and General Grievous are interesting and even scary in ways that they aren’t in the movie.  There are also many revealing conversations.  While it makes for an engaging novel with great storytelling, I should note that it would translate into a far too long and dialogue-heavy movie.  (I still contend in hindsight that the prequels would be vastly improved by ditching The Phantom Menace and developing the plot and character points of Attack of the Clones and Revenge of the Sith over three films).

Like its predecessor, this book is an improvement on the film it novelizes. Primarily this is due to the fact that it includes a lot of scenes where minor characters get fleshed out, such as Shmi and Lars and Jango and Boba Fett, as well as some deeper insight to Anakin’s relationship with Obi-Wan. Presumably these were in early scripts but were cut to prevent the movie being 5 hours long. There are scenes that I wish had made the cut in the film, such as when Padme brings home Anakin to meet her family.  It is much better at developing their relationship than any of the scenes that made it into the movie.  Unfortunately, all that painfully bad dialogue of Padme and Anakin expressing their anguished love is also present in the book (plus the author seems creepily obsessed with describing Padme’s beauty).  So this is no masterpiece of literature but it does offer some things that you don’t get from the movie.

Jedi Academy is a story set in the Star Wars universe about 200 years before the movies, and features Roan Novachez, a farmboy from Tatooine selected to attend the Jedi Academy on Coruscant.  Drawing on elements of Hogwarts and Diary of a Wimpy Kid, this richly-illustrated early reader book follows Roan through his misadventures and struggles to fit in with more advanced users of the Force.  I think I was a kid I would’ve been annoyed by the many references to schools in our universe, but as an adult I’m less attached to pure canon to let that interfere with my enjoyment of some silly gags.  This is a good book, and the start of a series, for the young Star Wars fan in your life. 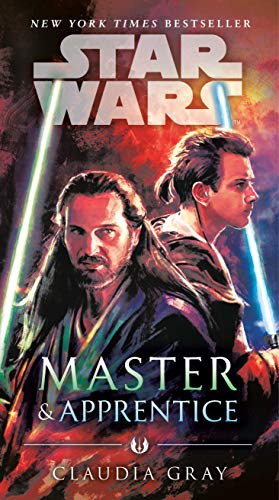 Continuing my daughter’s fascination with the Star Wars universe, we read this novel which is a prequel to the prequels. It tells the story of Jedi Master Qui-Gon Jinn and his Padawan Obi-Wan Kenobi on an assignment several years before the events of The Phantom Menace. The central part of the story is that neither master nor apprentice feels that they have bonded.  In this story they end up in conflict with one another over following the rules and yet that conflict brings them closer together.

This book is complex for a Star Wars story with the events arranged around palace intrigue as well as issues of corporate influence on government and the enslavement of people.  The book has some interesting twists (I didn’t expect who would be the villain) and introduces the eccentric Jedi Rael Aveross, an old friend of Qui-Gon who is serving as a Lord Regent to a young queen.  I really like the character development in this novel of both Qui-Gon and Obi-Wan as well as the many new characters (members of the royal court, corporate agents, and even an interesting pair of jewel thieves who ally with Qui-Gon).  It makes The Phantom Menace all the more depressing for sacrificing opportunities for great character moments to bland CGI special effects and comic relief.

“It matters,” Qui-Gon said quietly. “It matters which side we choose. Even if there will never be more light than darkness. Even if there can be no more joy in the galaxy than there is pain. For every action we undertake, for every word we speak, for every life we touch—it matters. I don’t turn toward the light because it means someday I’ll ‘win’ some sort of cosmic game. I turn toward it because it is the light.”

Fork in the wild.
Memento mori.
December starts tomorrow, which means….
I am too old to run.
This just makes me want to push the button.
SPARTACUS, a story of friendship.