25 years ago the students, teachers, families, and alumni of my high school – a small Catholic school in Greenwich, CT – were informed that as of June 1991, the school would no longer exist. The decision was made by the Roman Catholic Diocese of Bridgeport as a cost-cutting measure due to declining enrollment. In the weeks prior to the announcement the Diocese floated the idea of consolidating my high school with another school in the diocese, thus pitting one school against the other as to which one would get to stay open, as well as making other claims that made many question the Diocese’s commitment to education.

I was graduating that spring and disappointed that I effectively would have no alma mater.  The stakes were higher for students in the lower grades, especially the Juniors who would have to attend another school for their final year.  And so, these students organized a walk-out.  I don’t know how much effect this protest had on the Diocese, but I do know that a sympathetic reporter from the local newspaper covered the walk out and it was given top billing in the newspaper, above news of the Gulf War.

All this is preamble to a sense of déjà vu, I’m getting as today students from across Boston Public Schools will walk out of class today and march on the Massachusetts State House to protest the state and city government’s continued cutting of school budgets. Like the protest at my school 25 years ago, this originates completely from those effected most, the students, originating with students at Snowden International School at Copley.  And in this case the stakes are much higher: 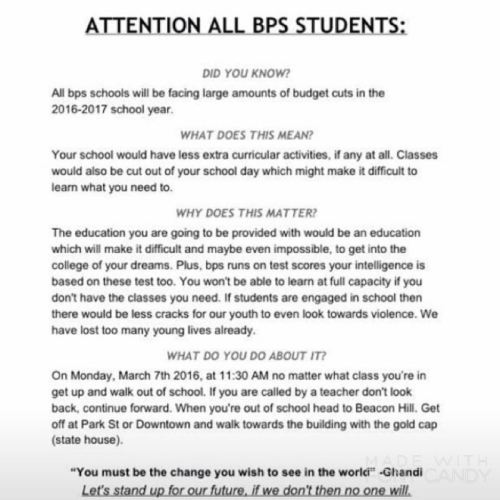 I’m proud of the students at our high schools for taking direct action and stepping out in protest today.  Among other ways of showing support I’ve signed this online petition and encourage other Boston adults to do so as well.  I hope that our children’s voices will be heard today, and like the local newspaper did at my high school 25 years ago, the local Boston media will cover this event.

Unfortunately, there is considerable bias in the Boston media when it comes to public education as they news generally sides with the politicians and corporate “philanthropists” pushing education reforms that lead to underfunded schools and pitting schools against one another for resources.  If the media acknowledges opposition to what’s happening to our schools at all, it is to say that the Massachusetts Teachers Association is fighting for their union members. A recent Boston Globe column declared that teachers are vastly overpaid with generous time off and should considering voluntarily slashing their pay to save the school budget. Columns of this ilk are published with regularity, but the voices of teachers – real human beings with jobs include working nights, weekends & summers not faceless unions – parents, and students are rarely represented in the media.

In meetings and protests I’ve attended for Boston Public Schools in recent years, it is always the students who’ve impressed me the most.  They are eloquent in portraying the real effects of budget cuts and corporate education reform on their lives and education.  They are activists not by choice but by necessity.  They are the leaders of our movement and I hope and pray that their voices will be acknowledged before it is too late.

News coverage of the 3500 heroes who participated in the walkout:

The Violent Femmes are back after a 15 year absence with their new album We Can Do Anything.  By the sounds of their new song it could still be 1983 – which is a good thing or a bad thing depending on your perspective.  The song that looks back so far musically is appropriately called “Memory.”